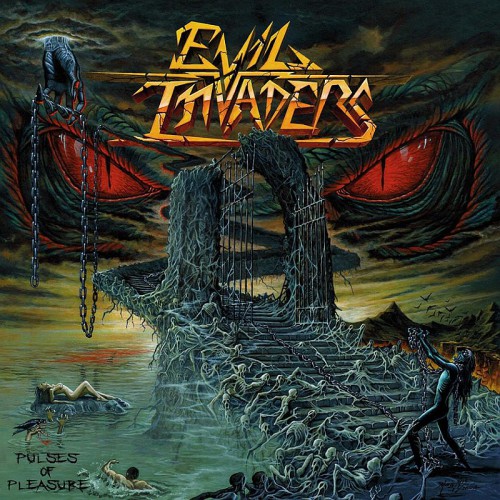 Evil Invaders were formed back in 2007 in Belgium. After a demo and EP release, it’s finally time to release their first full length Pulses Of Pleasure. This is my first meeting with their music. But after hearing the name I only can assume I’m in for some old skool speed/thrash. And after listening to the album for several times I was definitely right.

The album kicks off with Fast, Loud ‘n’ Rude. And the song does what the title says. Good fast riffs and high pitched voices that immediately reminds you of the speed/thrash bands from the eighties. Especially Agent Steel pops in my mind right away. Even the production sounds like the eighties. A good opener and the good songs follow each other up. One of my favorites is Eclipse Of The Mind. A good fast track with some awesome guitar solos that really want to make you move. On the other hand, this seems like a good live band that knows how to make a party and let you move during all their songs. And of course we all have heard the music Evil Invaders is playing many times before from the original bands from the eighties. But that doesn’t mean new bands can’t take over the flag and play some fine tunes and give good shows. I like the bands, like Steelwing and Enforcer, from the couple of last years that keeps it alive. And now with the first full length from Evil Invaders, we have another band to party to. The album ends with the great Master Of Illusion that makes you scream and play air guitar one more time.

So if you’re in the eighties speed/thrash metal and would like to listen to some fresh blood, you should give these guys a chance. They’re presenting here a fine album.