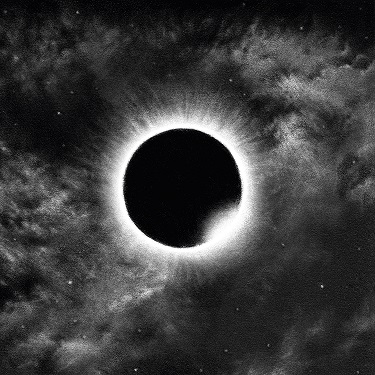 By Laetitia
Over the past year, the star of the German black metal formation Der Weg Einer Freiheit has been rising. Last year, the band got signed by Season of Mist and they are about to unleash the highly anticipated follow-up of 2012’s Unstille, called Stellar. Since anticipation means expectation, yours truly found herself quite curious about what this third full-length had to offer.

The fans that are already familiar with this Würzburger band know that they won’t shy away from primal black metal aggression, but also incorporate atmospheric/avant-garde elements. Atmospheric black metal can be lose their edge in the (over)use of eerie soundscapes, Der Weg Einer Freiheit certainly has not. The opening track ‘Repulsion,’ for example, consists of somewhat Enslaved-like clean vocal parts and background music, but then the music takes a turn for almost atonal, icy riffing that is able to give you goose bumps. The production of this record has a raw edge, which is exactly the kind of atmosphere that Stellar needs.

Over the course of six songs (varying from three to twelve minutes) the quartet takes the listener through a musical whirlwind. The drums and the high-pitched vocal aggression on ‘Requiem,’ make you feel like you’ve ended up in a blizzard and ends with a rather melancholic outro. The atmospheric elements mostly shine through when the songs start and finish, but the mid-section in ‘Eiswanderer,’ undoubtedly conjures up an image of starry night skies. The tranquillity is shattered quickly though, by again a very impressive array of blast beats.

The last track, ‘Letzte Sonne,’ is the magnum opus of this album. Aside from incorporating all the previous elements, you are treated with a little unusual drumming structure (for this genre at least) and high-pitched, lamenting guitars that have an Agalloch (Ashes Against The Grain) feel to them. All in all, this track demonstrates the excellent musical capabilities of this band.

Stellar will not disappoint (atmospheric) black metal fans. The record offers a great balance of raw black metal misery and a pinch of ambience that probably darkens the listening experience. It has certainly made me curious about the live shows of Der Weg Einer Freiheit, to see if they can pull this off on stage (especially their drummer, who must have quite some stamina for this).