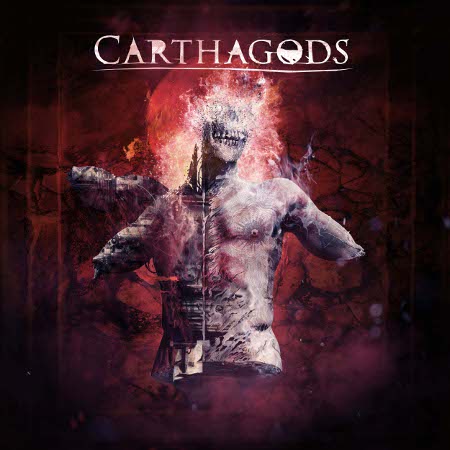 By Laetitia
It seems that in the last years metal bands from the African continent are steadily leaving their mark on the international metal scene. The Tunisian heavy metal formation Carthagods has existed for over seventeen years, but not until recently the band released their self titled debut record.

The album – the band describes the album as a compilation: it features old material from demos that Carthagods released in 2005 and 2008 and new songs- opens with My Favourite Disguise. This song features vocal contributions from Tim ‘Ripper’ Owens, one of the guest contributions on the album (from a few notable names in the metal scene). What Carthagods offers is a trademark, fast and riff-orientated heavy metal sound.

What is noticeable from the first track onwards is a somewhat thin production. The guitars lack a rich sound and mainly the lines of the guest vocalists (except on the acoustic song) tend to be soft against the background of the music. With a more powerful sound, many of the songs would have impressed the listener instantly. Instead, one has to hear through the bleak sound and listen to the compilation a few times before getting a good grasp of the music.

Leaving that aside, the compilation features nice tracks. Memories of Never Ending Pain (both versions) let you hear the versatile voice of Khema.M, whose vocals are deep, but with a raspy overtone. The acoustic track is a stripped down version of the song. The simplicity of the instrumentals and the duet between the singers brings out the feeling in the lyrics. On Shadows and Eater of Sin the heavier side of Carthagods is revealed: the listener is hit with a full frontal heavy metal riff attack.

All in all, the self titled compilation of Carthagods is not a bad start and the band can surely appeal to heavy metal fans.