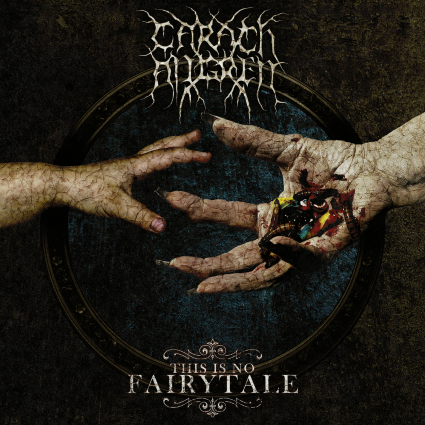 By Laetitia
Fairy tales are originally more grim than the stories that have been written down over the centuries. However, the Dutch horror black metal masters Carach Angren take it to a whole new level with their fourth effort This Is No Fairytale. The album tells a fairy tale that is somewhat familiar to us, but as one can expect, with a perverse twist that makes your skin crawl, but is enthralling as well.

Having enjoyed all efforts in Carach Angren’s discography tremendously, yours truly has been looking forward to this particular release. Yet, the fear sneaked in that the band’s trademark symphonic horror sound could start to feel slightly monotonous after four records. Luckily, this feeling was as unfounded as can be. Carach Angren has fleshed out their sound in such a way that it remains recognizable, but you do not feel that you are listening to Where The Corpses Sink Forever all over again.

The album opens with ‘There’s No Place Like Home’. If any song on This Is No Fairytale reflects the sound of Carach Angren, this is it. It features the haunting – sometimes slightly cheesy – symphonics, the eerie piano parts, the rhythmic approach to vocals and a build up to a bombastic ending, which is only a prelude to the abhorrence to come, both story wise and musically.

The interlude ‘Dreaming of a Nightmare in Eden,’ is this album’s ‘Hexed Melting Flesh’, ‘Al Betekent Het Mijn Dood,’ and ‘Spectral Infantry Battalions’. Meaning, a short song purely structured on vocals and symphonics. Similar to the aforementioned songs, it’s a masterful transition and key to the atmosphere. Songs like ‘Possessed by a Craft of Witchery,’ and ‘The Witch Perished in Flames,’ contain more death metal like harsh vocals, which adds another fine layer of brutality to the music.

All in all, with This Is No Fairy Tale Carach Angren has demonstrated that they are not victimized by their own sound, but rather evolved it to perfection. With this in mind, one can only look forward to future works by this band. As for the ending of the fairy tale: the album title says it all.

Rating: 9/10
Track listing:
1. Once upon a Time…
2. There’s No Place Like Home
3. When Crows Tick on Windows
4. Two Flies Flew into a Black Sugar Cobweb
5. Dreaming of a Nightmare in Eden
6. Possessed by a Craft of Witchery
7. Killed and Served by the Devil
8. The Witch Perished in Flames
9. Tragedy Ever After