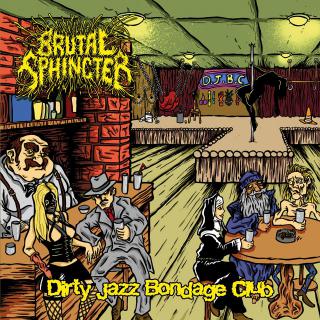 By Wouter
What we have here is the debut album by the Belgian goregrind band Brutal Sphincter. I’ve reviewed their demo too in 2013 which had nice grooves but was lacking in the production (obviously). But you could tell they were in the right set of mind because they decided to name a track Strangled with a Horse Penis. What else did you expect from a goregrind band?

I’ve noticed two things while listening to Dirty Jazz Bondage Club. Firstly, the production is much better than on the demo. Not a surprise though, but the overall sound is now really heavy. Especially the drum computer doesn’t sound as hollow and thin as before. The demo songs are also added on this release so you can compare it yourself. The second thing I’ve noticed is the addition of a second vocalist. He uses a pitch shifter and produces those deep snoring vocals, which sounds great with the gory and amusing music.

Dirty Jazz Bondage Club is a good party grind debut. It contains a healthy dose of blast beats and many danceable oompa-loompa rhythms. Mix them with a heavy distorted guitar and finish it with guttural and snoring vocals and there you have it, the perfect ingredients for a gore grind record.