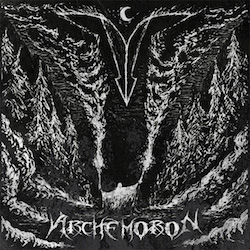 By Wouter B.
Portraying themselves as ‘pure, hateful, misanthropic extreme metal’, Archemoron is exactly that on Sulphur and Fire. Fear the Greeks bearing gifts?

This Greek formation, meaning the beginning (arche) of death (moros) in ancient Helenic, has released its’ third full length on June 13th of 2015, Sulphur and Fire. The likewise named opening song is an abode for the rest of the album: Fast paced, blasting beats and brutal technical riffing (by Melikertiis and Typhonas), intertwined with atmospheric, slow paced haunting and melodic sections, cocktailing a blackened death (or just ‘extreme’) metal’. Just what the doctor ordered.

The hissing, subdued and tormented vocals by Aristomenes intersecting with clear voices take you along a hateful trek in old Greece, as is for instance done on ‘Sailing to the Black Sea’. The haunting melody opening on ‘I, the Black Dessert’ continues in a song with some quality (slower parts of slightly Behemoth-like) drumming.

These guys however are not afraid to mix a bit of classic (almost Motorhead) sounding guitar work along with some marching Marduk war ensemble drumming for guidance (‘Blitz’). With rock-like riffs at the intro of the song ‘Aristomes’, the song initially sounds easy going. Sounds deceive however, as any rest you thought you might have found is soon overrun by blast beats thundering mercilessly over it.

The album takes you on a journey of brutality, haunting shores and bottomless depths using unexpected melodies laced with hatred and proper aggressive riffing. Some of this we may have already heard, yes…but these guys deserve a big nod for doing it right and different (better) compared to your average blackened/death band out there. The recording sounds a bit under-produced, which is a welcome change compared to bigger names.

Besides, it’s actually done very well with regards to dynamic range (difference in volume levels), making it a pleasant album to listen to, likewise compared to current ‘standards’. A nice album to be added to the wall of quality black (errrmmh pardon my French, ’extreme’) metal releases of 2015.

Rating: 7.5/10
Tracklist:
1. Across the seven seas of my soul
2. I, the black desert
3. Ancient callings
4. Aristomenes
5. Sailing to the black sea
6. Lemourian silence
7. Preachers of heaven, maggots of earth
8. Omnia movens
9. Blitz
10. Lacerate the mind