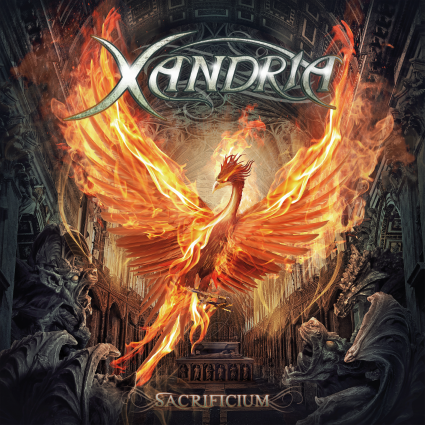 By Laetitia
Even though the German symphonic metal band Xandria has been around for seventeen years, they have always been the band you hear of, but not actually listen to, in my case. That has changed, mainly due to the recruitment of Dutch vocalist Dianne van Giersbergen (Ex Libris), as there was no way around that news. Sacrificium is the first record of the five piece with the raven black haired singer as their front woman.

Sacrificium opens with the explosive, majestic title track of ten minutes. A remarkable choice, as these kinds of songs are often saved for the last moment. The track begins seduces you with a calm, suspension building symphonic intro, but then takes a turn to overwhelm you with continuous power riffs, interwoven with a whirlwind of choirs and keys. This ‘get on with it’ attitude, is much appreciated by yours truly, as it touches the heart of this record straight away. The listener is also introduced to Van Giersbergen’s grand, sometimes angelic soprano voice, which perfectly blends into the music.

The record continues with similarly powerful songs. Take Stardust, a powerhouse with catchy verses and rolling drums. Dreamkeeper demonstrates the more mellow side of Sacrificium. The song sounds a bit restrained, yet still upbeat, making it one of the more easier tracks. Little Red Relish (and there are many more moments like these on this album) is reminiscent of early Nightwish, lyrically, vocally and music wise. This taps into the one of the disadvantages of this album, it builds on an already well known formula. Whether or not that is a problem, is up for the listener to decide.

All in all, Sacrifium is a strong statement of Xandria. Despite of their line-up changes over the years, they are fully capable as musicians to create a powerful record and it’s a great way to introduce Van Giersbergen as their new singer to the crowd. The music is not all that innovative, but the songs are well written and I am sure it will appeal to fans of symphonic metal.