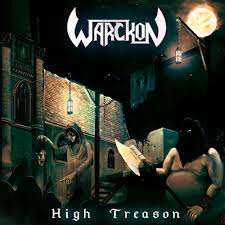 The Belgian thrash metal quartet Warckon recently released its sophomore full length effort, named High Treason. From the first track (Mare Tranquilitatis) on, it becomes that this band has a sole purpose: to play classic, Bay Area inspired thrash tunes. Take for example the title song High Treason: it’s structured around typical upbeat riffs and the raspy vocals of singer Wouter Langhendries. The drums and bass guitar give all the songs a groovy edge. This shows the four metallers show that they are experienced when it comes to playing their perspective instruments and when it all comes together in a song, the listener is treated with ten straightforward songs. One can easily imagine the live shows of these guys can turn into a mosh pit that lasts the entirety of the gig.

The production of this effort is not as smooth as it could be. However, in the case of High Treason, this is not something that would disturb a listener. The raw edge to the recordings suits the style of the music. There is one thing that Warckon should take into account though. If they want to grow beyond being a nice band that plays classic thrash, and there are more of such groups out there, they should invest in the creation of a more distinctive sound in an upcoming effort.