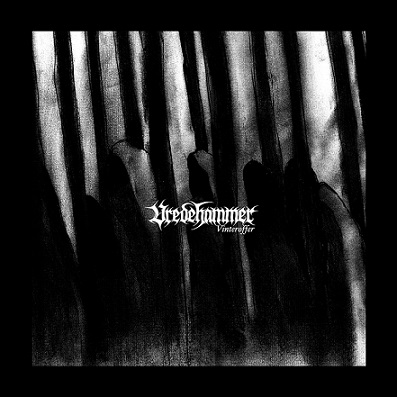 With its first full length called Vinteroffer, the Norwegian black metal band Vredehammer wants to crawl from the underground, break its way through the permafrost and present their music to the worldwide metal scene. Backed up by a label as Indie Recordings and a pretty good debut album, they should have no trouble taking the first steps to world domination.

The intro ‘The Awakening,’ sets a portentous mood. Fans of the Dutch black metal group Carach Angren might find the ominous orchestrations vaguely familiar, as they are composed by Carach Angren’s keyboard player Ardek. For the record, the similarities between the two bands stop after this. Also, don’t expect a type of raw, chaotic black metal with a terrible and noisy production. Vinteroffer has a clear production and the music is accessible for people who are generally into the more extreme kinds of metal.

‘Cthulhu,’ gives you an idea of what is to come, yet it is not the most spectacular track on the album. You are hit by a force of blast beats and cutting edge riffs and deep guttural vocals. The composition is as tight as a face just injected with botox, however what misses is something that will make Vredehammer really stand out.

This view changes throughout the album though. From ‘Seduce Infect Destroy,’ on, most of the tunes become more dynamic. The drums are not solely full speed blast beats anymore and a variety of guitar melodies tease your ears instead of a monotone wall of riffs. A song that reflects this perfectly is ‘We Are The Sacrifice’ and the title track ‘Vinteroffer’.

After a somewhat false start, I can especially recommend Vinteroffer to fans with a taste for (Norwegian) black metal. You will hear traces of the bands of Vredehammer’s fellow countrymen, a bit Kampfar-ish and a little like Keep of Kalessin every now and then. However, Vredehammer is not copying these groups. This four piece has its own style of composing, which is diverse and botox tight. And what about world domination? As said, the first small steps are taken.