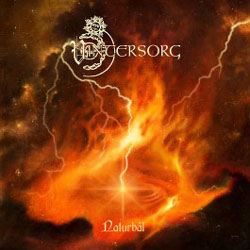 By: Sam
Two years ago almost to the day, I had my very first Vintersorg listening experience. I was assigned to review the band’s most recent album to date, Orkan – and once I’d heard it, I had to acknowledge my embarrassment for never having checked the band out before. I was really impressed with Vintersorg’s unique sound and the energy of some of the tracks on Orkan. Most of the time, when I review an album by a band I’m not already familiar with, I tend to stop listening to the album for good once the review is published. That wasn’t the case with Orkan; I went back to it numerous times after completing the review, sometimes just to get another dose of “Istid.”

But now, I have to admit that I’m having trouble figuring out what to say about the band’s latest effort, Naturbål – which, incidentally, is the third part in their four-album series about the natural elements. Jordpuls was dedicated to the element of earth, while Orkan focused on air; Naturbål is all about fire. What’s tripping me up here is the fact that Naturbål is so similar to its predecessors, and yet, it’s different in a myriad of ways. It has all the “elements” (see what I did there?) that I loved about Orkan – vocal harmonies, mighty growls, symphonic keyboards, and progressive guitars. The melodies are the kind that stick in your head, and they feel comfortably familiar after just a spin or two. But unlike with Orkan, at some point while listening to Naturbål, I stopped noticing where one song ended and another began. This album works incredibly well as a complete piece; it flows more like water than fire, in fact. There’s really no point in doing a track-by-track breakdown here, since basically every song offers all of the above-mentioned aspects combined in a unique and beautiful way. Start anywhere you want, and you’ll find something to appreciate, whether you’re a fan of black metal, folk, or even classical.

That all sounds pretty great, right? So now comes the part where I have to explain why I’m giving Naturbål a score that’s half a point lower than the one I gave Orkan two years ago. It comes down to something so purely subjective that it’s hardly worth mentioning, but since I’m the one doing the reviewing here, I have to mention it: Vintersorg’s latest effort is heavier on the female vocals than their previous one was, and I’m personally just not a huge fan of clean female vocals generally. That’s absolutely not a judgment of the singer herself, who is really very good; for some reviewers, the female vocals might actually warrant a higher score. Just…not for me. I like my vocals as deep and/or growly as possible, thank you. Luckily, Naturbål delivers quite nicely in that area, as well – there’s really something for everyone here. If you enjoyed Vintersorg’s last two releases, chances are, Naturbål will spark your interest as well.