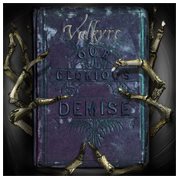 Fans of female fronted metal who’ve looked further then the big names in the scene, perchance also discovered the Belgian band Valkyre. Some years ago, in 2007, this group released its second demo Consolamentum. Some years later, around 2009/2010, the activity of this band ceased and they slipped into oblivion. What happened in this period remains unknown ‘till this day. What we do know is that the Belgian sextet (in a brand new line-up) is back with its album Our Glorious Demise.

In terms of style things have not changed radically, Valkyre remained true to the genre they once started in. In terms of their music, I cannot say anything about their former sound and the sound you can hear on Our Glorious Demise, as I was not familiar with this band before. The production of this record is quite fine, the symphonic elements and other instruments are given enough space. The vocals of Claudia Michelutti suffer from that every now and then. Her voice is soft and sweet and for that reason simply does not measure up to the fullness of the music. Even the piano drowns out her vocals sometimes.

The tunes on the album linger between very nice and okay. Most of the songs are written well. Your ears will not drown in gothic metal clichés (though slightly present, like the choirs in Will U Be There), but hear accessible, atmospheric rock. The issue mainly lies with the vocals. They are often too weak and balance between being false and barely clean. For example on Call of the Valkyre, which is a dynamic, up-tempo, heavy metal influenced track but it sounds like Michelutti struggles to reach the right notes. Other than that, this song is a gem. Not to say that Valkyre’s singer should be banished from singing. You can hear potential, for example on Wide Awake, where you finally get the feeling she has the potential of more.

Final words on this album: Our Glorious Demise is decent, with some highlights. The music is not terribly innovative, but Valkyre does have its own sound. All in all, it would be nice to see this band drop the monotone, ‘gothic’ traces that surface every now and then, and focus on a more heavy metal style. The songs with those influences are the most exciting. If Michelutti works on her vocals a bit more as well, a next effort might spark more enthusiasm.