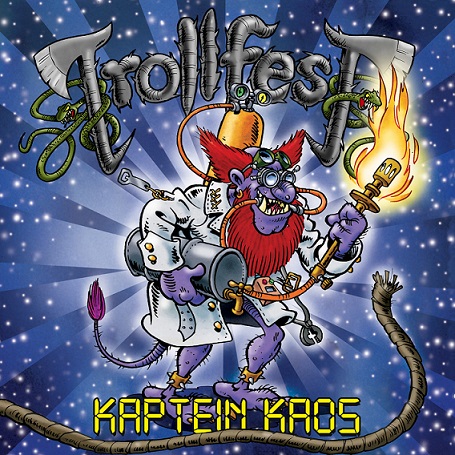 By Laetitia
Kaptein Kaos, the sixth effort of the Norwegian band Trollfest does not simply take you on a musical journey. It’s a fast and chaotic voyage, similar to a rollercoaster: once you are in it and the ride has ended, you want to go again. And again.

This particular rollercoaster features the Balkan music theme that Trollfest has integrated in their songs before, but you also might want to prepare yourself for a Ricky Martin-esque sound.

The intro Trolltramp is a collection of odd sounds that perfectly creates the feeling of not knowing what to expect next. Then Kaptein Kaos organizes a mutiny and takes over. The track is trademark Trollfest: a colorful collection of instruments and the clean vocals set the folky atmosphere, topped with the punky vocals of Trollmannen.

After two cheerful tunes, you arrive at Ave Maria, one of the highlights of the record. The beginning of the track is dominated by guitar riffs and musically it may remind you of (the catchier side of) Turisas every now and then. A traditional sounding and catchy chorus gives the song its own character though. If the previous songs didn’t get you dancing in the living room yet, this one surely will. The next song, a gentle, instrumental track called Seduction Suite No.21, will give you a moment to catch your breath.

A few seconds later, you will find out how Ricky Martin fits into this story. Solkskinnsmedisin has distinct Latin American influences. This, in combination with the clean vocals results in the slight Livin’ Da Vica Loca feeling. On the second half of the album the folk aspect is cranked up, making the music even more swinging and dynamic.

All in all, Kaptein Kaos is an effort that will not disappoint folk metal fans. It’s a trademark and good Trollfest record with enough variety to entertain you throughout all thirteen songs. An advice: if you are attending a Trollfest concert soon or you are simply going to listen to Kaptein Kaos at home, put on your dancing shoes.