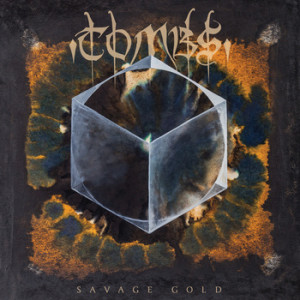 The third effort of the Brooklyn-based, post metal band Tombs successfully taps into the primal vibe that is at the core of metal music. This record, Savage Gold, has been getting raving reviews (from within the metal scene, but also from mainstream media) and the album has already been mentioned as a candidate for year lists. So, what is all the fuzz about?

First things first, do not feel daunted by all the labels that are given to Tombs: post metal, experimental, post punk and so forth. All those terms do not mean much in this case. What you do need to know is that the ten tracks on Savage Gold meet the wishes of most extreme metal lovers.

Opener Thanatos draws the listener in with a compelling and sludgy intro. Drummer Andrew Hernandez does not waste a second and immediately starts blasting. The song may remind you the old school death metal wave and the husky, guttural vocals of singer and guitarist Mike Hill add to that. The production of Savage Gold is minimalistic, meaning unpolished, which triggers a cold and an altogether rusty atmosphere.

The beauty of this album is that it takes you beyond the boundaries of the well known genres and it pampers you with all that extreme metal has to offer. Luckily, the alternation in styles is blended well into the music and does not disturb the listening experience. Take for example the icy, yet somewhat melodic riffs and shrieks on Portraits. It could easily be found on a black metal record.

Quite another thing is the almost dissonant track Deathtripper. Up to this point, you’ve heard an impressive array of fast paced metal. This song drowns the tempo with a lumbering bass, repetitive and simple guitar notes and dreary vocals (probably with the means of a voice transformer). The song (and some of the other tunes as well) does not seem to come to an end. Cutting them off a little earlier might have given the album even a more powerful edge.

All in all, Savage Gold is a well crafted album and it deserves the praise it has been getting. Fans of extreme metal would do well to check it out.