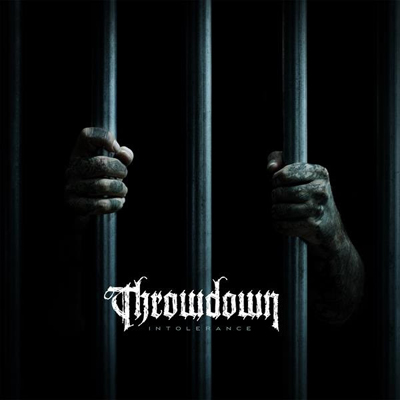 Intolerance is the latest release by Orange County, California based Metalcore based band Throwdown. This is the band’s first release since “Deathless” which was released in 2009. For me this album is a change in style and sound for the band. The album was mixed by Zeuss (Hatebreed,Crowbar,Demon Hunter), and is a super charged, pure metal album front to back.

The album speaks a message of fighting for what is right and never backing down from what you believe. The sound and flow of the album reminded me of the early work of Hatebreed (Under the Knife (96), Satisfaction is the Death of Desire (97)).

The riffs are simple yet powerful with that sludgy groove that has made this genre one of my personal favorites for over a decade. The songs are straight forward and are very short with each track lasting around 3 minutes. The album moves quickly and the listener will find themselves at the end of the album in the blink of an eye.

Not to worry though, this album is one you will listen through several times in one session without getting bored and it will definitely keep you banging your head. Vocals on this album are top-notch with Dave Peter’s signature screams. You can definitely hear some Randy Blythe and Jamie Jasta influences in some of the songs.

The title track “Intolerance” also has that Lamb of God feel to it and keeps the listener engaged for a little over 2 minutes and will have you starting the album from the beginning.
“Born and Buried Alone” was one of my favorite tracks on this album. The sound is a mix of older Chimaira and trademark Lamb of God. Metal fans of all sub-genres should applaud this work.
“Condemned to Live” is a song that I can’t say enough about. This is the final track and ends the album with a bang. The tempo is a little slower at the beginning, building up to the final brutal minute that had me head-banging like a maniac and playing my air drums. One word for this track: impressive.

The heavier sound and simplified outlay of the album is a welcome change as a fan of the band since “Vendetta”. With Throwdown, you really never know what is next but you better believe it’s going to be heavy and something that you will listen to many times over. Metalheads rejoice, finally something that is worth listening to. Thank you Throwdown for showing the genre how to melt faces. Very highly recommended to any metal fan, you should add this one to your collection. I give it an insane 9.5 out of 10 horns \m/