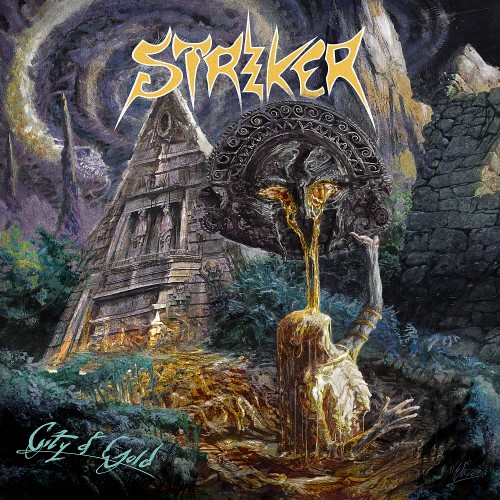 Striker is a Canadian heavy/power metal band that has started up in the year 2007.
Since then they have released three full length albums. And album number three is called City Of Gold. When listening to the first two albums you could hear the improvement so I expect and hope that this third album will also be better than the previous one.

The start of the album is good with some fast tracks that are good live songs where the crowd could sing along. You already can here the improvement on the songs in comparison to the previous album. Everything sounds better: the production, the quality of the songs. Although they must watch out to don’t be too similar to Iron Maiden. During a song like Start Again I only can here Iron Maiden. But besides that note there is enough to enjoy of Striker. Especially for the old skool heavy metal fans. I also want to see this band on a German festival, like the Rock Hard festival could be a good place for this band. They can keep the crowd going and keep then sing along.

Songs as Crossroads and All For One are great songs. Fast songs, great riffs, catchy vocals, smooth bass lines and a nice guitar solo. All For One is probably also my favorite song of the album. But also the song Second Attack is a real good one that could easily become a live favorite. But there are also some lesser songs on the album. Songs like Bad Decisions and All I Want are not the best ones. And although the songs are mid tempo tracks and gives you a break for the fast stuff, somehow it don’t convince me. They could have done that better. The album ends with Taken By Time and is a good song to end it with. This is a good example of a mid temp track, much better than the others. For the people that are purchasing the limited first edition get four bonus songs. One Iron Maiden cover (surprise) and three own Striker songs.

So after listening this album several times I can be happy with the result. There is a huge improvement since Armed To The Teeth. And there are several tracks like All For One, Crossroads and Second Attack that are straight away killer tracks. So for the heavy/power metal fans, it is worth to try this album. And if you were into Striker before, just buy the album.