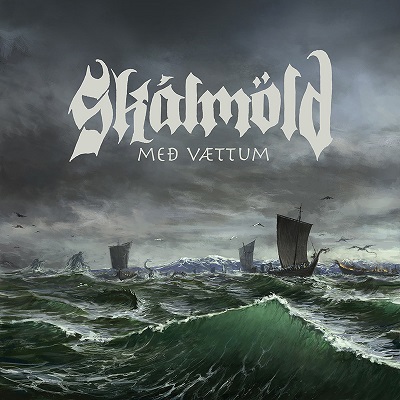 I’ve said it before, and I’ll say it again:Skálmöld are a breath of fresh air in a sometimes-stale folk metal scene. If you’ve listened to the band, then you know what I’m talking about (and if you haven’t, go do it. Right now. I’ll wait). The sextet’s first two albums, Baldur and Börn Loka, debuted to rave reviews and spun epic yarns of Iceland’s pagan past in the band’s native language, set against a musical backdrop of innovative death metal peppered with classical, punk, and folk elements. For folk metal fans, can it get any better than that?

Yes, it can! With Með Vættum, Skálmöld turn it up to eleven. This third album is tighter, fiercer, and…dare I say it…more “metal” than anything they’ve released thus far. It’s a rush from beginning to end. The band have managed to amp up their sound without losing the elements that place them solidly in the folk metal genre – gorgeous vocal harmonies, a smattering of more “traditional” instruments (that oboe!), and subject matter that highlights Iceland’s rich folkloric tradition. As on previous Skálmöld albums, all of the songs on Með Vættum are linked to one another by a common theme. They trace the life of an Icelandic heroine who fought in four battles: one in each cardinal direction, and each during a different phase of her life. In every battle, she was assisted by one of the vættir – Icelandic spirits who protect the natural world. They took the form of a bird in the north (“Með fuglum”), a dragon in the east (“Með drekum”), a giant in the south (“Með jötnum”), and a bull in the west (“Með griðungum”).

While the Icelandic lyrics make it tricky for those of us who haven’t mastered the language to really appreciate the story, you don’t need a dictionary to realize that musically, this album is a masterpiece. It leans heavily on old-school metal riffs, combining them with brutal growls, choral harmonies, and crushing waves of melody to create something that is simultaneously new and classic – typically Skálmöld. Each track is powerful and intricately layered, and even the longer songs still have at least one melodic hook catchy enough to snag those of us with short attention spans. The guitar solos on tracks like “Með fuglum” and “Að sumri” will impress the shredders among the band’s clientele, while the expansive, multi-layered guitar and vocal harmonies that unfold on “Með drekum,” “Að vetri,” and “Með griðungum” would even put some atmospheric metal bands to shame.

If I had to say one negative thing about Með Vættum, I’d mention the same minor issue that also bothered me ever so slightly on the band’s previous two albums: Sometimes the harsh vocals feel just a little too harsh for the music. But hey, that’s just part of Skálmöld’s style, and it’s one of the many, many aspects of their music that makes them unique. For me, this album is a clear favorite in their discography. Knowing Skálmöld, their next album will take things up yet another notch, but until then, Með Vættum will definitely keep me satisfied. It’s one for the ages.