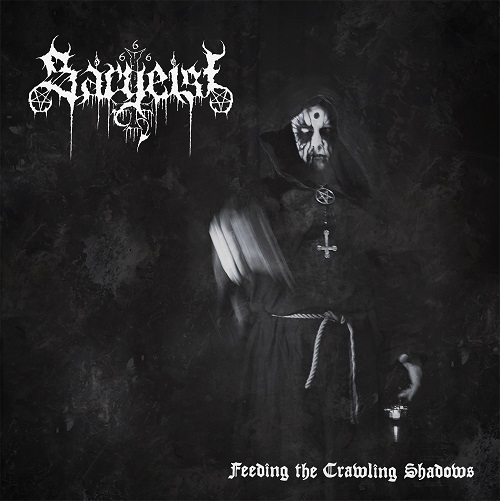 By Omer
Finland has always been a mighty Black Metal region, producing well known names in the genre such as Beherit, Horna, Behexen, Impaled Nazarene and the list goes on and on for miles, until one eventually stumbles upon Sargeist. Although it has been Shatraug’s (of Horna and Behexen) personal project at the beginning and later on was joined by other members of the two above mentioned bands, Sargeist quickly flourished in the underground and succeeded in making a name for themselves.

Sargeist are the little, evil nephew of the Finnish Black Metal scene. Wait, what? Ah, never mind about psychotic nephews. Anyway, the much-more raw sound, the non compromising attitude, the lack of melodies, the ear-piercing tunes altogether have created an untamable musical project. In a good (sorry, evil!) way, of course. Feeding The Crawling Shadows is the band’s fourth full length album and it comes after 4 years since the band’s last album, Let The Devil In, which was one of the best releases that year.

Right on the start, with the title track, one can fairly understand the musical line that was taken here. The approach to the music is a very traditional – clad in darkness and spreading like a deadly plague, directed by fast, sharp riffs that would rip one’s ear drum from time to time and guarded by a legion of fast-as-hell drum blasting.

The barrage of darkened arrows continues, as the more interesting “In Charnel Dreams” begins. In contrast to whatever current “fashion” and/or outside-influence hold some Black Metal bands captive – with Sargeist you will not find any trace of it. The song spins around itself a bit, rolling from the known, fast track, to a more subtle pace once in a while. Hoath, the vocalist, succeeds in delivering his low tones and slower singing once the aggression eases up a bit.

“Unto The Undead Temple” is one of the gems here. The slow, shivering guitar work (that comes around every now and then) that opens the track prepares the listener to a whole new level of atmosphere. With songs such as this, and the latter “Snares Of Impurity”, Sargeist proudly presents the hard, cold fact that even within their own genre of music, they can still produce some very interesting tunes to sink with.

I am a little bit disappointed about one thing with Feeding The Crawling Shadows – and that is that the band fails to repeat the same production which the previous album had. Here, at some point the thick wall of distortion simply blocks half of the instruments and the listener can barely detect anything else besides the guitars. So, even though it adds a tidy bit more atmosphere to the new release, it’s also the album’s Achilles heel.

It is also the place to mention that the above statement is not present at all times (it’s actually only present at specific moments), and a fine example of a song that manages to balance itself is “Inside The Demon’s Maze”, in which one can hear all the instruments clear enough and Hoath’s hellish vocals simply run through it like a wound through flesh.

Sargeist are managing to keep the tracks interesting by actually building up a peak, which is something you don’t always find in Black Metal, let alone the raw kind. The swirling “Funerary Descent” circles around the listener over and over again before nailing him with heavy blows towards the end.

I cannot say the new album is terribly varied or that the band has made some significant progression with it. What I can say, is that Sargeist are simply being their most succulent version of themselves here. It may not be the band’s best album up to date, in this humble servant’s opinion, but it is an honest release, which brings forth the band and their ideas at their purest form. Go on, Feed the Crawling Shadows… Or just go get the album. That’s also an option.

Rating: 7.5/10
Tracklist:
1. Feeding The Crawling Shadows
2. In Charnel Darkness
3. Unto The Undead Temple
4. Snares Of Impurity
5. Return Of The Rats
6. The Unspoken Ones
7. The Shunned Angel
8. Inside The Demon’s Maze
9. Kingdom Below
10. Funerary Descent