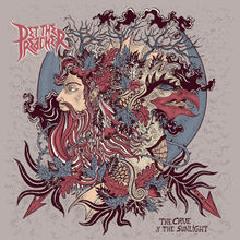 By: Ingrid
Two years after the release their debut album ‘The Banjo’, the Danish Stoner Rockers from Pet The Preacher are releasing their second full length: The Cave & The Sunlight. I’m not unfamiliar with this genre, since there’s no way of getting around it anymore these days ;), but neverrtheless kinda unfamiliar with this band, so, let’s give it a try!

The album starts a little unexpected, in a nice calm and groovy flow with The Cave, but soon speeds up into the more darker, yet catchy ‘Let Your Dragon Fly’. Clearly leaning on their blues sound and riffs, the gentlemen provide us with both deep and heavy songs like Remains or the longer masterpieces What Now and The Web, as well as more catchier sing-alongs such as, by the drums lead Kamikaze Nights and Fire Baby. The bass guitar focused, two chaptered Marching Earth pt1 & 2 grooves right into your face and leaves you asking for nothing more than it already is.

Supported by Torben Wæver Pedersen on bass and Christian Von Larsen on drums, head of this trio Christian Hede Madsen clearly leads the album with his edgy voice and piercing riffs. The album is well recorded, has enough variety on it and nothing bad can be said about it; though it does lack a little bit of originality. Still, that doesn’t matter much, as Pet The Preacher managed to produce nice straightforward stoner record with The Cave & The Sunlight.