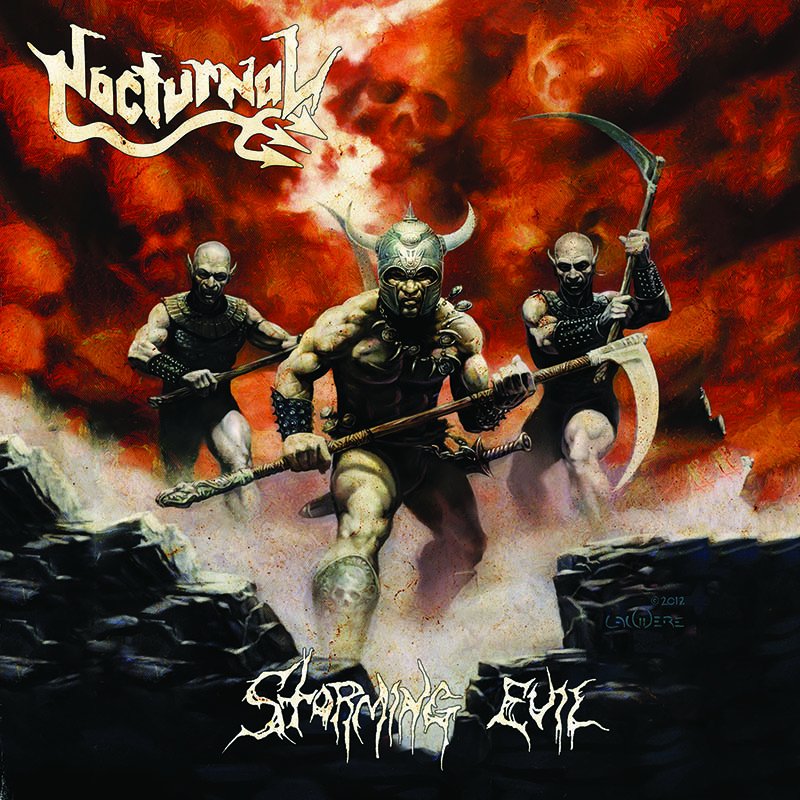 By: Omer
Nocturnal, to those of you out there who aren’t familiar with the name, are a tight group of German thrashers that on average, wait an abundant amount of years before they start working on actual, full length albums.
Hell, they would release a million splits, compilations, and EP’s, but a full length? The last one was 5 years ago, and went by the name of Violent Revenge which was, well, violent as hell and sounded great. Their debut, Arrival Of The Carnivore from 2004, was also pretty much of a killer. Don’t get me wrong, I’m not saying it’s a bad habit. On the contrary, it means that the band isn’t releasing anything major until they’re absolutely sure about it.

Anyway! Finally, these maniacs are back with a brand new, pissed off album, Storming Evil.
“Storm From The Graves” opens the release in the only way possible – makes the listener feel his teeth were punched. An up-tempo storm of angry and slashing guitar riffs that leave no place for doubt that these guys mean business. Tyrannizer, the almighty woman behind the microphone, scream, shrieks and beats her way through the heavy tunes. She reaches your ear, but instead of caressing it – she rips it out with another of her violent chords!

The second track, “Rising Demons” continues this very same path. The aggression levels up even more, and the sick passages between the rhythms won’t give the listener any kind of rest, throwing all these slashing riffs and insane drumming at him.

The sound is sharp, yet not too clean and doesn’t have a modern feel to it, which is good, considering the fact that a lot of bands fall for this new, crystal clear sound that makes them sound plastic. I guess it’s obvious, when the one behind the production is Mersus, of the mighty Gospel Of The Horns.

One can’t neglect the fact that Nocturnal simply takes everything that’s good about oldschool German Thrash/Black, and throws away the bad. You simply can’t ignore the Sodom and Destruction (and I’ll even take a blow here, when I’ll add Desaster to that list) homage that these guys are doing so proudly. Pay a listen to “Preaching Death” or “Crushing Thebones” and you’ll get that feeling too. Nocturnal takes on something as big as that, moulds it, twists it, spins in around and eventually comes up with their own, not-too-original yet killer sound and that is exactly what turns these Rheinland Thrashers into what they are.

Track number 8, “Ripping Knives” would… well, simply rip your skin layer by layer, when Avenger thrusts some razor sharp guitar tunes at the listener, and together with Skullsplitter’s restless pounding and Tyrannizer’s shrieks, you get a recipe for a short yet one of the deadliest songs on the album.

The entire album is about 45 minutes, which is exactly the amount of time such an album should take. If it’s too long, it’ll fall under the tag of being too exaggeratedly long for an albums that every song dwells in pretty much the same pond of tunes.

All in all, Nocturnal’s new release is nothing one hasn’t heard before, even numerous times. It’s not really original, but it does have one advantage over a load of other modern Thrash/Black metal bands nowdays – Nocturnal are actually doing it good. Hell, they’re doing it great.
You need Storming Evil.