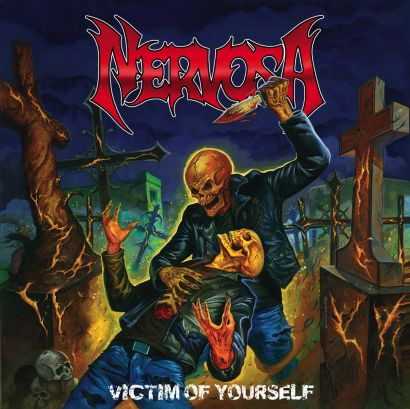 By Wouter
Nervosa is an all female trio from Brazil, but these girls are not going to sing you lullabies. On the contrary, they’ll present to you fierce and furious thrash metal. And with success, because just with releasing a single EP, they’ve already gathered more than 80.000 likes on Facebook. And now, two years after the release of that EP, Time of Death, it’s time to release their debut full-length called Victim of Yourself.

The band brings you back to the roots of thrash metal with some grooves here and there. A slightly modern approach to that old school style. Just like the polished and clean production which gives it a more modern feeling. Also, it’s not full-throttle speed the whole time, they also allow some melodies in some sections. Not for too long though that it becomes a drag, but they do tend to slow down from time to time. But some songs are straightforward thrash metal with no compromise though like “Into Mosh Pit” which is also my favorite. Even the high-pitched shrieks fit in very well in that particular song, while it sounds out of place in other songs on the album.

Victim of Yourself is a good debut in the line of bands like Havok and Suicidal Angels. I think these ladies will do very well in the new wave of the thrash metal community. They play aggressively and fast, but they also have some groovy sections which is very common with these bands nowadays. Just like the high-pitched shrieks. All by all, it’s a pretty good album and I’m quite sure the thrashers out there will bang their heads to this.