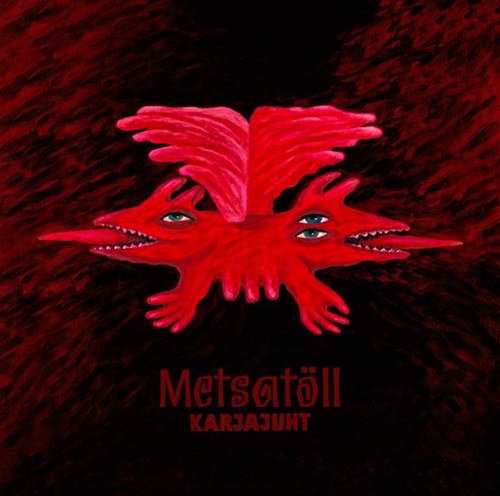 By Sam
In my experience, there tend to be two kinds of folk metal fans: those who like their music raw, earthy, and primal, and those who prefer a more polished, sanded-down sound. I tend to put myself in the latter category, so if I’m honest, I can’t say I’ve ever been the biggest Metsatöll fan. I enjoy a handful of their songs, but I always found their music a bit too rough around the edges for my musical palate – of course, I make no bones about the fact that I’m extremely fussy!

On the other hand, I can appreciate what my fellow folk metal fans see in the band; their sound has an energy and an edge that can be hard to find elsewhere in the folk metal world these days, and that’s something you’ve got to admire.

In that respect, the Estonian band’s sixth studio album, Karjajuht (“Pack Leader”), continues in a similar vein as their previous works; it’s raw, it’s fierce, and it’s definitely folky! On the whole, Karjajuht is somewhat more up-tempo than on Ulg or Äio – and it’s catchy enough that most of the songs even had me bobbing my head along with the beat. The opening song, “Külmking,” and the second track, “Lööme mesti,” in particular, felt like someone was grabbing me, screaming in my face, and tossing me right into a mosh pit full of sweaty long-haired dudes in fur vests with drinking horns at their hips. I mean that in a positive way, obviously. And after those two songs, they only gave me a brief four-minute breather before chucking me right back in there with “Must hunt.” It’s hard to do a circle dance by yourself in your living room, but I sure as hell tried.

However, I think the thing that most endears Metsatöll to me on this album is their particularly heavy use of the kannel, Estonia’s answer to the zither. What a beautiful instrument! I know they’ve used it on their albums in the past, and I’m not sure what they did differently during the recording process for Karjajuht, but I think it shines through so much more strongly here – “See on see maa” was the first track on the album to really leap out at me specifically because of that gorgeous kannel intro, and even though it’s one of the slower songs on Karjajuht, it’s definitely my favorite. The album’s other highlights for me also feature enchanting kannel passages: “Tõrrede kõhtudes,” “Surmamüür,” “Karjajuht,” and “Talisman.” The melody of that last song, the album’s closing track, has a haunting familiarity to it that only makes me like it more.

After a few plays of this album, I have to say that I’m starting to reassess my position on Metsatöll; Karjajuht contains some real gems that no folk metal fan should miss. To put it another way: If you were a Metsatöll fan before, you will definitely love this album. And if you weren’t, you should give it a try anyway – it might surprise you, just like it did me (and keep an ear open for that kannel!).