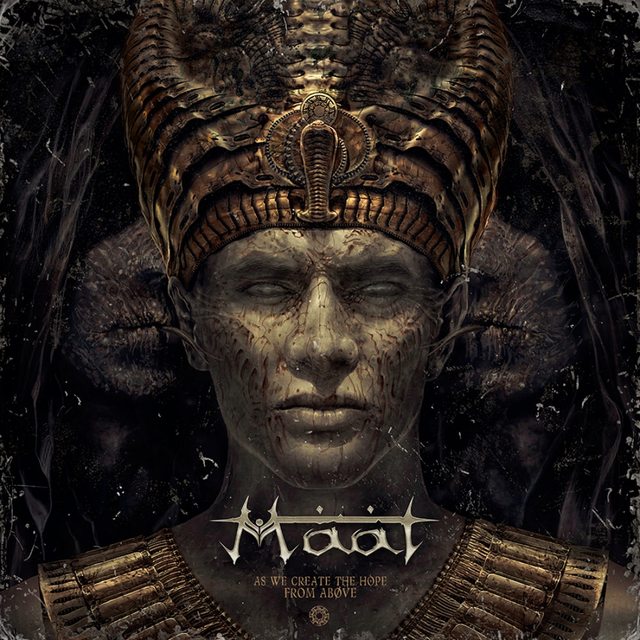 By Omer
I love ancient Egyptian themes. I love it even more when combined with a nice dose of extreme metal, because there aren’t many of those out there. The case is pretty much this, with German death metallers Maat, who named their band after an ancient Egyptian goddess.

Don’t worry if you hadn’t heard their name before, I was unfamiliar with them as well, until their debut full length, As We Create The Hope From Above, landed on my desk. When I gave the album its’ first listen, my instant thought was that Maat were yet another band on the verge of being a copycat and/or a-really-good Nile-ish tribute band. I’ll let you in on a little secret – that’s the main reason this review was delayed. I changed my thoughts about the album at least twice, deleted everything and wrote everything down again.

As I progressed, the album revealed more and more hidden layers that took harder digestion and new depths emerged. The opening track is also the title track and it opens with a whole barrage of riffs and angry fast drums to congratulate the fresh listener. It is highly noticeable that the band aimed toward a sound that aspires to that of Nile and late Behemoth (and Septic Flesh, I dare say), both in theme and in musicianship.

The heaviness here, on the other hand, is in parts heavier than the above mentioned (yes, it is possible) and that is a factor that makes this album a very good one, even though it is not terribly original. “Shards Of Osiris” is another fantastic song, combining a very fast paced chorus, alongside dramatic rhythm breaks that keep the level of interest quite high, which is a thing that could also be said about track no. 3, “Sobek”, that also incorporates nice short oriental (duh) guitar passages every now and then.

“El-Enh-Aa” is one of the main gems in the album in my opinion, as it is represents the band’s style in a few single moments and concludes the sound, riffs and overall attitude to an almost 5 minutes of pure brilliant musicianship that from one hand really resembles the oriental influences and on the other hand, mixes it well enough with some very harsh tunes without sounding like they’re trying too hard. The aggression continues pretty much during the whole length of the album, and damn, “Preservation Of My Immortal” situated as one of the heaviest songs I’ve heard lately, all the while being a little banal – which is exactly the one thing that bothers me with Maat.

The album is great, and freshly made songs like “In Shoals” would make your ears bleed (or pick up a camel and ride?) and the one before it would tear your neck from the amount of headbanging you’ll be doing, but, somewhere it’s not enough and that’s the band’s Achilles’ heel. As a debut album, Maat has a definite winner here. It’s one of the best albums I listened to lately and it’s quite addictive – but it will not be enough in the next few years and I hope that Maat would not sink in the same place they started in.