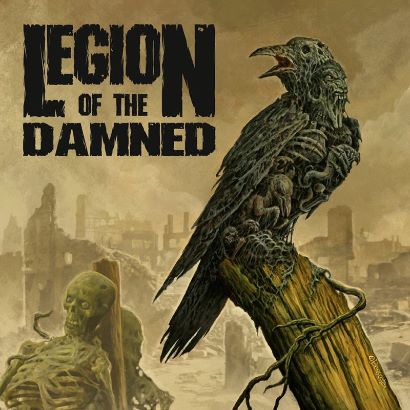 By Omer
Legion Of The Damned are a well-known name across Europe. A band renowned for their thrashy yet catchy as hell sound, and for maintaining their music pretty much unchanged. 2014 is their 9th anniversary, and to celebrate that, the band just released Ravenous Plague, which is the Dutch group’s sixth full length album.

On one hand, I’m pretty sure I know what I’ll be hearing here, but on the other, I’m curious to see (I mean, hear) if LOTD got something else up their sleeve.

The album begins with an intro track which lasted for about a minute and seemed quite unnecessary in my opinion, since the second track, “Howling For Armageddon” started blasting it’s way right on the first second and a greater effect would have been achieved without that into track. The good old, familiar Legion-ish riffs turned my abdomen upside down and the drumming made my legs race in an effort to keep up with the psychotic speed.

“Black Baron” shows no signs of letting the gas go and Twan’s guitar work is superb here, mixing some very harsh tunes alongside more melodic parts, and topped with some flesh shredding work while the songs is at it’s peak. Maurice’s vocals are one of the most prominent parts that make the Legion Of The Damned puzzle, staying pretty much on the same screeching, damn-angry tone.

The main problem I always had with Legion Of The Damned, ever since the Malevolent Rapture (which is my personal favorite) times is that their songs are great, the material is brutal enough for one to break his neck while listening to, the thrash influences are ruthless and the the band’s overall attitude is that there is no such thing as compromise. But, and it’s a big “but” – only a small number of their tracks are truly memorable over a longer period of time.

“Doom Priest” and “Summon All Hate” manages to revitalize some new spirit into the material, while constantly changing from the familiar structure, to a more mid-tempo, heavier one. Unfortunately, among the above-mentioned tracks which are pretty generic, there’s pretty much only one song in the entire album that reclaims the attention of the listener after a while of spinning, and that is “Bury Me In A Nameless Grave”. The thrash pours out like blood out of a wound and does that in the best way LOTD could think of. It would pluck out your soul, chew on it, then put it back in place through your bleeding eardrums.

All in all, if you’ve ever listened to Legion Of The Damned in the past, then you’ll soon find out that Ravenous Plague holds nothing too original. It is indeed a good album that would provide you with countless, quality head banging moments, especially if you’re not familiar with the band’s material yet.