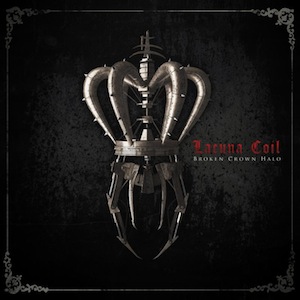 By DJ Insanity
Italian metal juggernaut band Lacuna Coil has been energizing fans with their unique sound and intense live shows for 20 years, and show no sign of slowing down with this new release, Broken Crown Halo.

“Broken Crown Halo” features the flawless, and near angelic voice of vocalist Cristina Scabbia. Blended in with the harmonious is an array of ambient sounds that tells a story through music and lyrics. I feel that Cristina really connects with the listener through-out the album and the added effect of Andrea Ferro layering his vocals in, almost gives me chills.

A variety of influences can be heard on this album without the band straying too far from what has mesmerized fans for two decades. The record shows a nice contrast between heavy and harmonic while also focusing on quality song writing. Marco Coti Zelati(Keyboards, Bass) adds the element that makes this album a pure joy to listen to with his work on the keyboard. He also adds a nice thump and clear tone in the low end on the bass.

“Nothing Stands in Our Way,” begins the album with an eerie backing track followed by an up tempo, intense, beat driven anthem. “Cybersleep,” I found to have a unique sound and the verse of the song made me think of the classic James Bond films. A very energetic song, with diversity and possibly the best backing tracks on the album.

“Infection” is my favorite track on the album with an addictive melody and simple, yet well composed guitar riff. The sound reminded me of older work from the band from albums that featured hits like “Swamped” and “Heaven’s a Lie”. This track features old song styling and influences with a twist. I hit repeat on this one.

When I found out I was getting the chance to review this album I was stoked because Lacuna Coil is one of the most consistent bands in metal music. This album far exceeded my high expectations I had for what a Lacuna Coil album should be. “Broken Crown Halo” is the best release the band has had to date. This album raises the bar even higher than has already been set with previous releases. Lacuna Coil stands out in the crowd with their song writing prowess and ability to deliver a quality product every time.

By the courtesy of Broken Neck Radio