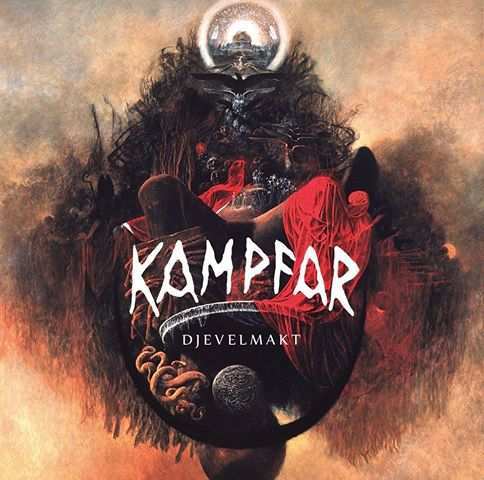 By: Ingrid
With their previous album ‘Mare’, Kampfar went back to their roots of pure black metal, after they got lead astray. I am happy to announce that their new album ‘Djevelmakt’ continues to follow the path that Mare has lead Kampfar into.

2014 marks the 20th year of existence for Kampfar, and they couldn’t have celebrated it better than with an album like Djevelmakt. Even though it’s hard for me to stay objective with this band, and they will probably never disappoint me anyway, I am happy that Djevelmakt has that raw and dirty black metal sound, that is characteristic of Kampfar, and that I love so much.

As raw as the music itself is, as clear and well produced is the record. Sharp recorded guitar-work and clear drumming mark the album. New on this album is guitar player Ole, who joined when founding member Thomas left the band three years ago. The slight fear I had about the impact this might have on the band seemed to be unnecessary, because Ole immediately proofs to be a worthy replacement.

Kampfar’s music bears the title ‘pagan black metal’, but if you’re looking for nowadays typical pagan sound with happy flutes and bagpipes you’ll find yourself to be disappointed. Except for a small instrumental intro/interlude here and there, the only thing pagan about Djevelmakt are the (mostly Norwegian) anti-religious inspired lyrics that dominate this effort.

After a short piano intro, the album breaks loose with the energetic song Mylder. The raw sound of singer Dolk his voice pierces you through the bone and shows no mercy until the album is done.
Second song Kujon, but also a song like Fortapelse, again proofs how Kampfar is able to create the perfect balance between heavy guitar riffs and an atmospheric piano sound.

Songs like Blod, Eder og Galle and De Dødes Fane are the kind of songs I love most; the sound is raw, rough, deep but yet melodic, and sounds like it comes out of the very depths of Norway.
After seven very strong and devilish songs in Norwegian that proof this album to be worthy of its title, the band finishes with the only English, but not less powerful, song that the album contains.

With this, our journey into the abyss of anti-religion Norway has ended way too soon. Yet again, Kampfar has delivered us a real masterpiece, but I didn’t expect anything else. Like Mare, this album will make a lot of spins in the stereo of my car!