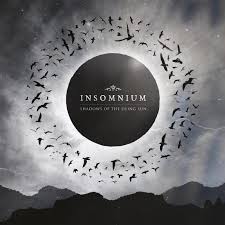 By DJ Insanity
“Shadows of the Dying Sun” is the latest release from Finnish death metal band Insomnium. This four piece band mixes metal and harmonic tones together flawlessly. Insomnium is well known for their breath taking live shows and in 2012 they performed as main support for British goth metal band Paradise Lost.

This releases showcases expert musicianship through harmony, ambient sounds and percussion that is hard hitting and effective. Insomnium is able to create sounds ranging from pure driven metal similar to Killswitch Engage. Additionally there are also elements of progressive metal, symphonic Metal, grindcore, and power metal. Fans of all ends of the metal spectrum ranging from: Iced earth, Lacuna Coil,Killswitch Engage and Dream Theater will be able to appreciate the diversity of this record.

The vocals have a good variety, growls that remind me of Arch Enemy and Devildriver. The clean vocals add a layer of diversity that gives the sound the fullness I expect from an album. Add that in with many working parts intertwining together throughout and you have a recipe for success. I love the chord progression on the riffs, mixed with the resonance and hard hitting deep guitar tone.

The albums second track “While We Sleep” comes in at just over 7 minutes long. This epic arrangement features various tempo changes with changes in moods with crescendos and de-crescendos that breaks the mold of traditional death metal. “Revelation” instantly reminded me of earlier Killswitch Engage releases such as “My Last Serenade” and “The End of Heartache”. This track never loses its unique style that Insomnium seems to bring to every track. Masterful lead guitar scales overlap a simple rhythm riff gives me chills every time I listen.

I was very impressed with the formula the band has for song writing. This is the first time I’ve heard death metal mixed with symphonic and harmonic riffs. It’s like the best combination in the world you could come up with, ok well almost. It took one song for me to be intrigued by this band. After listening to the album three times I found myself wanting to hear more of this band. I can now say I’m a fan and will be listening to their entire catalogue of songs. Any fan of death metal or catchy guitar riffs will appreciate this release. I highly recommend picking up a copy of Shadows of the Dying Sun.