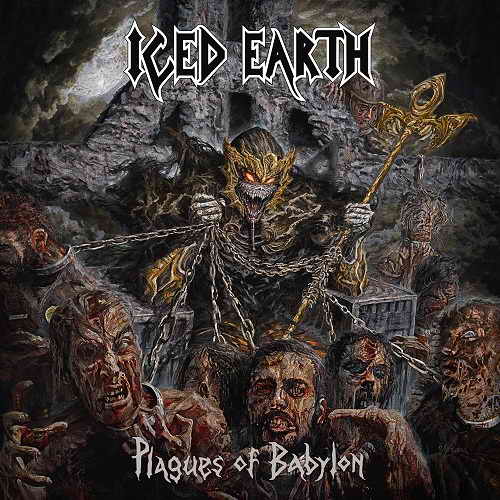 By Tom
Plagues of Babylon is the latest release by the metal powerhouse Iced Earth. This is the latest release of the band since their 2011 release “Dystopia” which received mixed reviews. The band stays true to their metal roots they have set forth that have stood as a staple in the genre since 1990. They also added some elements of modern metal, not focusing as heavily on backing tracks in the songs.

With the changes Iced Earth has been through, they still always find a way to get that trademark sound that is unique to the core. Considering that this is Vocalist Stu Block’s 2nd album with the band and Lead Guitarist Troy Seele has only been around since 2007, you would imagine that this line-up has been together since from the beginning. The title track begins with a build-up of epic proportions. The heavy thump of the tom-tom mixed with the magnificent distorted guitar tones ring through your speakers. This sets the precedence of what is to come for the 62 minutes of metal energy. The album is masterfully mixed together, consider it a feast for your ears as you clearly experience each instrument in its purest form for your listening pleasure.

Alongside the title track the album features other hard hitting brutal metal anthems in “The Culling” and “Parasite”. If you are fan of the slower ballad type songs, then “If I could see you” and “Spirit of the Times” are right up your alley. Other songs that instantly grabbed my attention and had me pressing repeat were “Democide” which is the 2nd track on the album and “The End”, which is in my opinion the most diverse song and lasting at just over the 7 minute mark.

If you want to know how metal for the masses should sound then I highly recommend this album. The flow of the album is easy to follow and it told a story for me that left me wanting more when I got to the end. Iced Earth has a formula for success that seems to be a lost art form in this day and age. After having the honor of getting to review this album, I can truly say that I am a huge Iced Earth fan till the very end. Well done, I give it an insane 9.5 out of 10 horns \m/