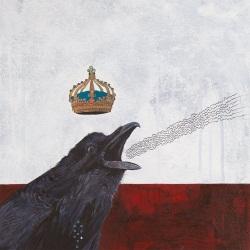 By Laetitia
Sex in the Seventh Circle is the title of the new record of London-based stoner four piece Hang the Bastard. The band’s second full length is characterized by tardiness, but with a dynamic approach to song writing that keeps you hooked.

The first track, Keeping Vigil, starts with a similar atmosphere as Bathory’s A Fine Day to Die: you can distinguish the sound of an acoustic guitar and chants. However, what follows in the next fifty minutes is nothing like Quorthon’s legacy. The vibe is interrupted by an assault of rousing riffs and the antagonized scream of vocalist Tomas Hubbard. The track is a good example of the type of songs that are prevalent on Sex in the Seventh Circle: riff-orientated, sludgy yet dynamic pieces of music.

In Morrs Tempest, the attributed stoner elements really surface. The tempo is decreased and the guitars and bass sound lethargic. It results in a song that awakens a spine-chilling feeling of despair. Mists of Albion is a song in an entirely different vein. The raunchy guttural vocals are traded for reverberant clean vocals. It is dressed with a simple guitar melody and thick, gritty riffs that surge every now and then. This demonstration of the band’s ability to write different pieces ends when Mists of Albion fades in the forcefulness of the title track.

Sex in the Seventh Circle brings the listener back to the key elements of this record: mid-tempo songs, that are heavy and structured out of riffs that almost have an hypnotic effect. All in all, with this album Hang the Bastard has shown that it is capable of varied song writing, which is exactly what this kind of tardy music needs to keep someone hooked. Thus, fans of the genre, but also fans of extreme metal who aren’t opposed to a tad of drowsiness, may find it worth to check out Sex in the Seventh Circle.