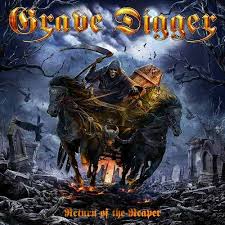 By Rob
It is almost two years since the last Grave Digger album Clash Of The Gods came out. So that’s about time for the band to release another one. Return Of The Reaper is album number sixteen since the band was formed in 1980. Obviously a highly productive band throughout the years. And in all that time they never really let us down. It’s like bands as Motorhead and Cannibal Corpse, you know what to expect and you know it will be done good at least. So let me take a good hearing to Return Of The Reaper.

The album starts with a nice piano intro by the Reaper. But with the second track the band blasts off with Hell Funeral, a powerful heavy metal song that typifies exactly what the band is all about. Followed by Wargod, another fast one. Of course there are several mid tempo songs like Grave Desecrator, a song that is easy to sing along, Tattoed Rider has some nice keys just as Season Of The Witch; but that song is a bit too long and takes the tempo out of the album.

At least it continues with Road Rage Killer that is a fantastic song with great guitar work. Then I come across a song that could be from Motorhead, Satan’s Host, but it isn’t. It’s nice done, A Grave Digger songs with a big touch from Motorhead.

The album may not sound very original but you could have known that. Grave Digger has their own style and they don’t need that much change every album. This is an album with good powerful fast songs with good heavy guitar work, some nice mid tempo songs and of course the ballad that is pretty boring most of the time, as it is for sure this time. Odd enough they ended the album with the ballad so it’s not that big of a deal.

Of course the great voice of Chris fits so well with this band. I know not everyone likes his voice but I love it. So for the heavy/power metal fans that don’t know the band, try it out. Also if you like Grave Digger you can buy this album in an instant. If you never liked the band before, well, you know what to do.