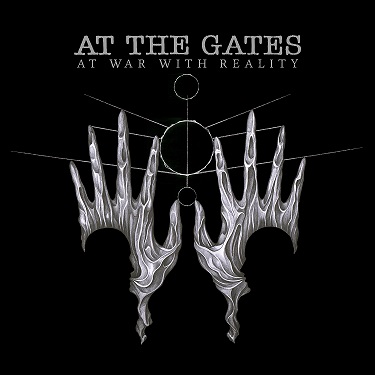 By Laetitia
Nineteen years have passed since the pioneer of the Gothenburg (melodic) death metal sound, At The Gates, released its most influential record, Slaughter of the Soul. After the five-piece reunited in 2007, they had been reluctant of making promises about a new album. Yet, at the start of 2014, a first hint circulated in the form of a YouTube video. Months later, the anticipation can be laid to rest and metal fans can feast their ears upon At War With Reality.

At War With Reality deals with the theme of magic realism, where magic is cast as a part of daily life. It is defined as ‘what happens when reality is invaded by something too strange to believe’. At The Gates merges the theme with their trademark sound fluently. The music on this effort is somewhat low paced in comparison to previous works, which contributes to the dark mood that one can hear throughout the record, take “City of Mirrors,” or “Heroes and Tombs,” as an example.

All the same, At War With Reality is mainly a continuation of where the band left off in 1995. The Swedes masterfully blend their known straight forward aggressiveness, like on “Eater Of Gods”, with carefully considered guitar melodies. It is exactly this formula that gives the record its hook and it ensures that you keep on listening through the entire 45 minutes. So, with this album, At the Gates does not reinvent the wheel, but the musicians pleasantly linger on the path that they have carved for themselves and for their innumerable aspirants.