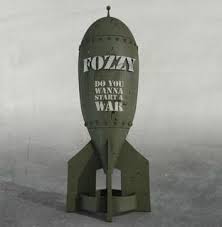 By Laetitia
Fozzy’s the previous effort, Sin and Bones, turned out to be a turning point for the heavy metal formation. The record was received positively by the press and they gained a lot of new fans. Now, the American rockers, led by former professional wrestler Chris Jericho, are back with the album’s successor: Do You Wanna Start A War. Can this sixth full length meet the expectations that were set with the release of Sin and Bones?

Fans who’ve already heard the single Lights Go Out, know what is somewhat different on this record. The band got inspired by legendary rock bands as Pink Floyd, U2, Queen and Led Zeppelin. This results in the facts that tracks like Lights Go Out, Tonite and the powered up cover of Abba’s S.O.S are poppy party songs. These tunes are upbeat and dominated by simple riffs. They would work well on a rock festival, but similarly at a mainstream feast.

Still, the music on Do You Wanna Start A War is mainly metal orientated (but accessible). Brides of Fire, for example, is layered with thick, modern riffs and guttural vocals. Bad Tattoo is a groovy song, with rough vocals and a perfect head bang rhythm. The party tracks detour seems to be an experiment and that is for the best. They are nice, but the heavier material of Fozzy is musically more intriguing.

In relation to Sin and Bones, one can conclude that this sixth effort is a nice continuation of previous work, but not necessarily a new milestone for Fozzy.