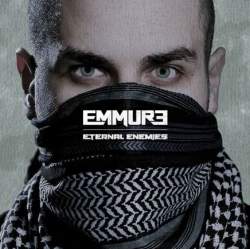 By DJ Insanity
Eternal Enemies is the latest release by metalcore band Emmure. An extremely heavy album from a unique band that tries to stay away from the cookie cutter, mass produced garbage of the mainstream music scene. This is the follow up to the 2012 Album “Slave to the Game” and it is sure to please fans of the metalcore/deathcore genre.

Emmure has built a reputation for being against all clichés in the music industry today. “Eternal Enemies” is the perfect title for this album, that is like 5 years of bottled up hatred and rage being let out through aggressive, brutal music. Being from Queens (NY) is a constant struggle and fight for survival and this fact is apparent, given the aggressive in-your-face lyrics and vocals. I have been drawn to this band since first hearing their music in 2009. They stand for what they believe in and never conform to what society and the “so-called” industry experts say, they emphatically hold two middle fingers in the air to their critics.

Vocalist Frankie Palmeri sends a clear and direct pissed off message to all the haters and fakes. A tribute to those that aren’t worth your time. This is one of the most aggressive albums I’ve had the pleasure of listening to. His screams and growls are top-notch. He adds some nice flow into the songs to show that he hasn’t forgotten where he came from. You have to stay true to your roots or you will lose the core foundation of who you are.

Mikael Mulholland and Jesse Ketive(Guitars) provide a low tuned heavy audio experience while creating some disturbing yet epic tones from their guitars that reminded me of the work of 90’s metal band Coal Chamber.“Nemesis” , the albums second track is aggressive with a deep groovy bounce. The vocals have a good crescendo of intensity leading up to a climax of brutality. This track is sure to have listeners pumped up, banging their head ready to dominate their enemies.

“A Gift a Curse”, mixes up the guitar styling, keeping the riffs simple and the chord progression was pleasing to my ears. The break downs in the song got my heart racing and wanting to throwdown and kick some ass.
“We Were Just Kids,” is a nice change of pace from the rest of the album with a mellow pace but it does not lose the core of what Emmure is. This track leads to audience out on a slightly less pissed off feeling and will leave fans wanting to go through the listening experience of the album all over again.

Overall, this album is a great find. However, I found the record to be missing some elements I look for in a flawless album. After listening through it several times I felt myself needing a break from the anger and aggression the album is geared towards. Luckily the final track provides relief from this message. This is a great metal album and is sure to place well on the metal charts and will cause massive mosh pits and one hell of a live show. Job well done. \m/