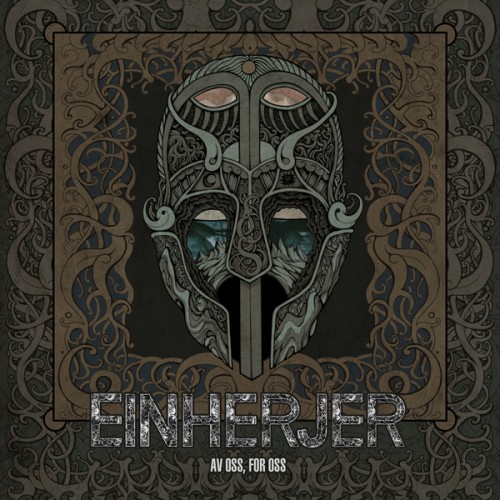 By Laetitia
Einherjer’s comeback album Norrøn (2011) was received with mixed reviews. Now, the Norwegian warriors are back with Av Oss, For Oss. This sixth full-length marks the fusion of Einherjers past and the band’s forthcoming musical path.

The intro “Fremad,” might just be the most trademark Einherjer tune on Av Oss, For Oss. The atmosphere is similar to that of Blot’s “Einherjermarsjen”. The synths provide the epic setting and a layer of horns, clean guitars and more keys finish this resplendent piece of music. What follows is a somewhat stripped version of what is known as the Einherjer sound.

“Hammer I Kors,” has the distinctive raspy vocals of Frode Glesnes and the familiar mid-tempo, guitar-orientated groove, yet Einherjer seems to have toned down several aspects of their music noticeably. Overall, the guitars sound softened and the symphonic elements are less. One might say that this ensures that Einherjer will not end up amongst the dozens of plain pagan/viking metal bands. On the other hand, it also means that the three musicians have rid themselves slightly of an element that made them stand out in the first place.

On the title track, “Av Oss, For Oss,” Einherjer managed to find the balance between the these days common metal ’n roll feeling and their more epic earlier discography. The lengthy song consists of a constant symphonic layer that is topped with simple, yet gripping riffs and in the middle of the track an almost southern rock-ish solo. All in all, it seems the perfect middle ground for Einherjer to build on in future efforts.