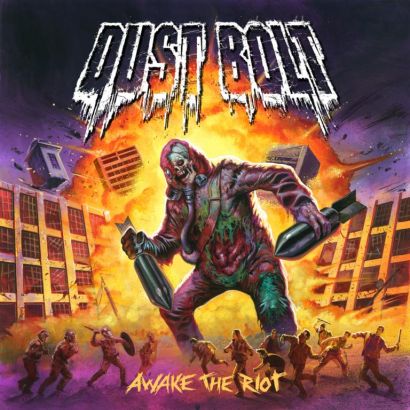 By: Ingrid
A few years ago you probably never heard of Dust Bolt in your life, unless you were living in Bavaria, Germany. But in only a few years, these thrashers managed to speed up their way to the top by winning the Wacken Metal Battle, being on tour with big names and signing with Napalm Records, where they are now releasing their second album ‘Awake The Riot’.

Dust Bolt is Lenny B. on guitar and vocals, Flo D. on guitar, Bene M. on bass and Nico R. on drums. Especially the last one is very much present on Awake The Riot. Fast and tight drumming marks the album and is the major plus side of this recording. Up tempo drums and great riffs give the album exactly the thrash sound you would expect, and proof how a thrash album should be, and makes up to the lack of originality.

Opening track Living Hell and follow up Soul Erazor are two of the highlights on this album, and make you feel as if there is an explosion after someone opened a can of Thrash Metal. The waves after the explosion keep hitting you with songs like Agent Thrash and Eternal Waste, but unfortunately have died out by the time the album reaches The Monotonous – Distant Scream.
Fortunately they got their act together again when they finish with an Evil Dead cover: Future Shock (you might want to wait just a little longer before taking the cd out of your cd player when you hear the last tune of it btw ;) )

Awake The Riot contains twelve (mostly) great songs, which are very well recorded. The production of the album is great, and you can’t deny the Bay Area influences in it. But having twelve songs on such an album also risks that the not-a-100%-into-just-and-only-thrash-metal-fan might have a hard time to make it until the end of the album and may get a little bored when listening to the album more than once.
Nevertheless Dust Bolt has produced a proper thrash album that certainly will get you moving in your chair, on your couch, and most definitely during a live show!