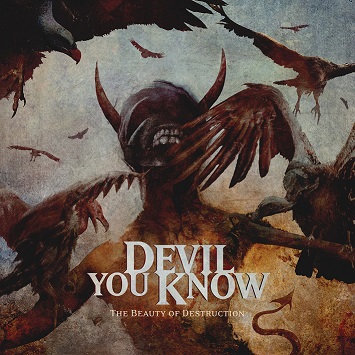 In theory, the ingredients for a great album are present. On The Beauty of Destruction, all the musicians are given a fair amount of space to show their skills. The guitar work of Artusato is dynamic, sometimes simple but powerful riffs are the fundament of most songs, but you’ll also hear good leads and solo’s. Sankey easily switches from beastlike blast beats to mid paced mellowness. Of course the recognizable and distinctive sound of Jones’ harsh and clean vocals eventually brand the tracks.

Opener ‘A New Beginning’, introduces you to the character of this effort. It starts with anthem like vocals and a straightforward, modern metal sound. These elements are alternated with a groovy and catchy chorus. As a consequence, you will find yourself nodding your head along to the rhythm of some songs. However, the problem with this song, as with many other tracks on The Beauty of Destruction, is the lack of inventiveness.

Of course Artusato, Sankey and Jones do not have to create a new genre and they should most definitely do what they are good at, music wise. The songs on this record are produced nicely and they aren’t bad, but this has been done before. The Beauty of Destruction contains typical modern metal, which a dozen other bands can and have created as well. An exception is the song ‘As Bright As The Darkness,’ a track with a completely different, almost gothic atmosphere. Refreshing almost, when one compares it to the eleven other songs.

So, if Devil You Know wants achieve more than just being a so called super group that is liked for its band members (and their former- or other bands), the band should step things up a notch to distinguish itself more. The potential should be present but it did not surface in The Beauty of Destruction.