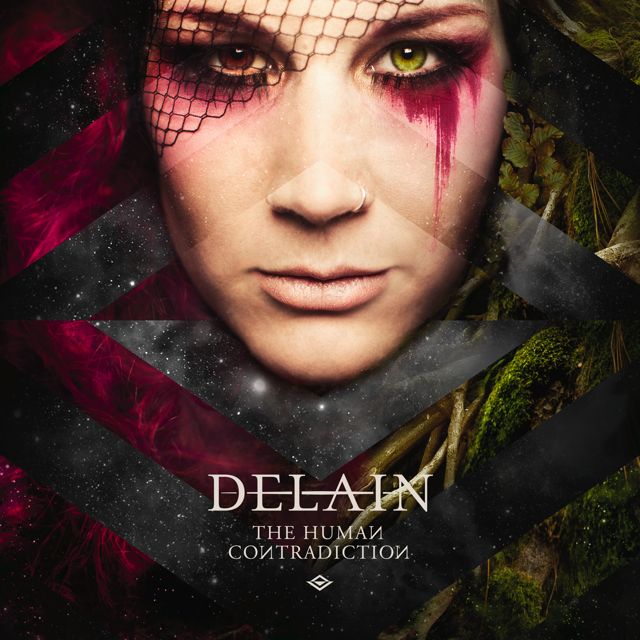 By Michael
It has been nearly two years since Delain released their We are the Others album and the band has been busy in between. Not only have they released the mini album Interlude, but since then, they have been touring all over the world. Now, Delain continues their journey with the new effort The Human Contradiction in which they still adress the “otherness” issues that humans cope with on a daily basis.

One of the main complaints about previous albums of Delain, is that the songs were becoming more “poppy”. Delain has shed this skin and evolved into a more mature metal band with a heavier sound on this record. Mainly because of the heavier guitar riffs and symphonic keys, the whole album feels more diverse and doesn’t get dull.
Even though The Human Contradiction is heavier, Delain does not lose their catchy tunes and specific sound which have brought the band international fame over the years. Instead of relying on others, Delain mainly focused on their own production team for the songs. Only at the last production stage, other musicians were involved.

The guest musicians on this album do deliver a great performance in enhancing the songs. George Oosthoek (former Orphanage) joins the band for the grunt parts in “Tell Me, Mechanist” while female grunts are done by Alissa White-Gluz (former The Agonist, now Arch Enemy) in “The Tragedy of the Commons”. This song by the way, is one epic finale of a great album!

But there is more, Delain once again have found an helping hand in Marco Hietala (Nightwish, Tarot) for two songs. You can already listen to one of thos songs, because a lyric video has been released for “Your Body is a Battleground”. One of my favourite songs on the album, “Sing to Me” is a great duet by Charlotte and Marco.

Immediately from the start, The Human Contradiction is intense, catchy, heavier than we are used of from Delain and just sounds great. Songs like “Here Come the Vultures”, “Stardust”, “Tell Me, Mechanist”, “Sing To Me” and “The Tragedy of the Commons” are gems for the genre.

During their kick off show in Zwolle, Delain proved that the new songs are great to hear live as well. The crowd were enthousiastic and you can read more about this show within a couple of days. If you are into female fronted metal, be sure to get this album.