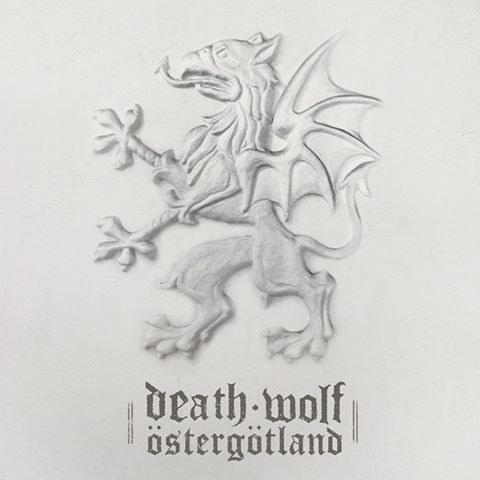 By Laetitia
If the holidays make you cringe and you tend to spend them in a misanthropic mood, you’d want to listen to the new record of Death Wolf (the side project of Marduk’s Morgan Håkansson) III: Östergötland. Its raw, punky and sinister sound will be helpful n loathing the ‘most wonderful time of the year’.

Last year, Death Wolf released its first record on Century Media – II: Black Armoured Death – and it was a record that needed a few spins before yours truly could appreciate it. It was eventually the dominant hardcore punk approach and vocals that kept me from really favoring the effort. With this in mind, I started listening to Östergötland, an album about roots, history and belonging.

While listening to the first track, Sea Wolf, the opinions I had about Death Wolf faded. The screechy, ear piercing punk vocals are hardly to be found on this record and the hardcore punk layer has mostly been traded in for a raw, primal black metal-ish sound, like on Thorntree. Of course, the musical roots (the group started out as a tribute to Misfits and Samhain) of Death Wolf are still traceable, like on Wall of Shields and Black Sunlight, a catchy horror-punk assault and the air of despair can also be heard throughout the album, like on the title track Östergötland.

All in all, Death Wolf created an album on which the band has put emphasis on its metal background and it is exactly this aspect that lacked on the Swedes sophomore effort. So before you start your Christmas dinner, be sure to check outthis fine piece of misanthropy.