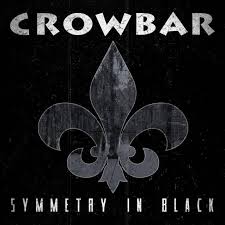 By DJ Insanity
Symmetry in Black is the upcoming release from Crowbar, a band that was instrumental in the New Orleans sludge metal movement. This movement created the foundation for creating a genre that is unprecedented, even to this day in the music industry. Crowbar has definitely modernized their sound while still keeping core elements of the music that made them revolutionary.

I was instantaneously engrossed in the heavy grooves and that authentic Crowbar chunky sound. Hearing the low tuned crunchy guitars took me back to the time when I first discovered the band with their hit “Slave No More”. Fans will easily recognize the unique raspy/gritty vocals from frontman Kirk Windstein. His versatility still shows strong even after 25 years of exceptional song writing and addictive melodies.

Crowbar put a lot of effort into precise composition of tracks on this album ensuring a quality listening experience. Symmetry in Black features many layers, musical stylings and moods through-out, that is sure to please even the harshest of critics. The guitar riffs and choruses written by Matthew Brunson easily rival any of the bands’ past albums, and may be the heaviest and sludgiest yet.

“Walk with Knowledge Wisely” is that first track on the record. This song focuses heavily on the composition and sound of Crowbar’s early work while modernizing the sound. I was pleased with the tempo changes, and the complex structure of the guitar riffs. I must also comment about the lyrics, which spoke to a message of being persistent, and having undying faith. This is song writing at its very best.

“Symmetry in White” has an eerie, chilling vibe. Personally, the lyrics of this track speak to the weight of living in darkness and shadows, and succumbing to this evil ridden world. The undertone is the ultimate demise of a soul which is narrated well through the musical accompaniment. I must commend vocalist Kirk Windstein on his flawless melodies and precise placement in the arrangement of his growls.

Symmetry in Black is an album I highly recommend to anyone who is a fan of hard rock, Metal, and Sludge. This is a well composed record that features amazing song writing and musicianship. Die hard fans of the band won’t be disappointed with this release, and it may very well bring a whole new wave of Crowbar fans who are hearing them for the first time. This album is very easy to listen to multiple times over and should perform well on the music charts.