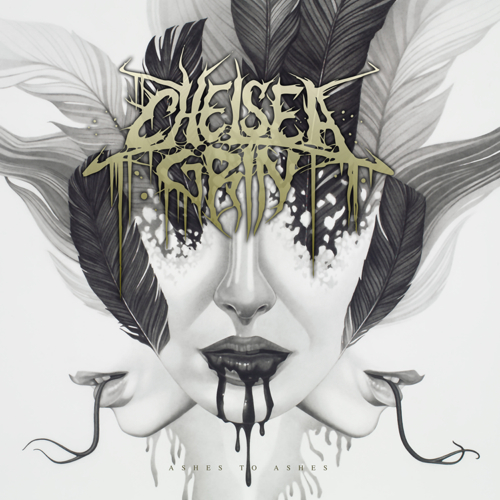 By DJ Insanity
“Ashes to Ashes” is the latest release by Utah death core band Chelsea Grin. Oh how I love these sub genres. Wait, scratch that, we are just going to say they are metal. This record is the bands third full-length and it is a very diverse brutal metal soundtrack. The band entered the studio in November 2013 and their first single was released December 17, 2013. This built much anticipation with the fans and while listening to this effort, I realized this release was worth the wait.

At first listen to this album it was hard to believe that such a large group (six members) could mesh so well and mix instrumentation to perfection. Chelsea Grin features a total of 3 guitarists which not only gives the music many layers for the listener’s ears to feast on, but also provides a lot of deep crunchy tone that is equally as pleasing.

Prior to researching this band in depth I focused heavily on the sound and feel of the recording. I was reminded of a mix between Emmure and As I Lay Dying. I don’t think this is a coincidence, as I read that Chelsea Grin was direct support for Emmure in early 2013. “Desolation of Eden” was recorded at Lambesis studios by As I Lay Dying front man and studio founder Tim Lambesis. I was pleased by the diversity of the album as a whole. Each track builds on the next it’s a magnificent balance of heaviness and technicality.

The first single, “Letters”, is one of the heaviest songs on the album and has a blend of hardcore/deathcore mixed together seamlessly. This song also features some guitar riffs that are Dream Theater like which is epic. This song is one of my favorites and should please the metal masses.

“Ashes to Ashes”, is a great lead-in song for the album. It doesn’t waste any time with filler noise, the listener immediately recognizes the high intensity ride they are in for. I just love when a band starts out an album with a swift kick in the ass. This song is my hands down favorite off “Ashes to Ashes”, with it’s technical crunchy and up tempo pace. Let’s burn this bastard to the ground is the battle cry for this track and I can’t wait to see this song live it.

Metal fans spanning many sub-genres should thoroughly enjoy this album. It has elements of various sub genres in metal today and the band really shows off their musical prowess. It was apparent to me that the band focuses heavily on content and musicality which I applaud. “Ashes to Ashes” will provide a great soundtrack for a road trip, or when you need that release from the b.s. that life throws at you. Just press play on this album and let all that aggression out, you’ll be glad you did.