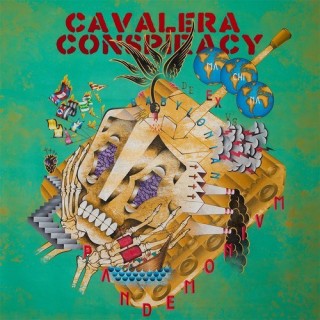 By Tom
Pandemonium is the latest release by heavy metal band Cavalera Conspiracy. It was released Oct 31st 2014 on Napalm Records. Cavalera Conspiracy is fronted by metal icon Max Cavelera who is most known for his work in Sepultura and Soulfly. This album was produced by Max as well and has gained much attention in the metal community since it’s release.

From the beginning of the album the listener is thrust into a high energy, fast paced, metal kick in the teeth. I was able to pick up on sounds similar to previous works of Cavalera (Sepultura and Soulfly). The tone was crunchy and groovy and the tempo never slowed down, it should energize the listeners and get their heart racing.

Pandemonium matches technicality with brutality for a masterful mix. After listening through the album several times I was able to notice the meticulous detail paid to balancing the instruments. Pandemonium is perfectly mixed and mastered.

Track 4 titled “I, Barbarian” was my personal favorite song on the album. It is the most hard hitting, groovy track and still provides that metal assault that fans expect. This was one that I put on repeat because it’s so good. “Scum” was another favorite song of mine. This song has a good build-up intro before immersing listeners into the chaos and brutality. This should be a favorite of headbangers for sure.

Pandemonium delivered exactly what I expected from a Max Cavalera release. Fans both past and present of his work should thoroughly enjoy this album. Elements of Sepultura, Soulfly and even Nailbomb are all present in this album. If you are a fan of technical, heavy and fast metal then Pandemonium should top your list of albums to buy.