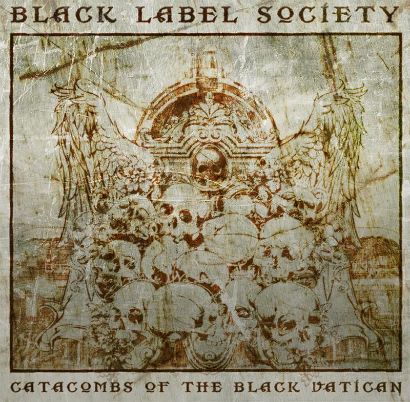 By DJ Insanity
Reviewing this album is like an early Christmas present for me to say the least. Catacombs of the Black Vatican combines all the elements of past Black Label Society albums and adds much more to it, giving the listener an experience unlike any they have heard before. Zakk Wylde was involved in every aspect of this album, from song-writing, producing and even mixing. he sound quality and mix of this album is second to none.

Since receiving this album I have listened to it at least 30 times, analyzing every second of it. Wylde places his trademark vocals, showing off his range and diversity. Listeners are drawn to the high pitched raspy tone that has made Wylde stand out since BLS’s inception in 1998. Listeners will also appreciate the pure tone and vocal control in his low register in the slower ballad type songs that I would describe as masterpieces.

Zakk Wylde(Guitar, Piano, Strings) lays down his own unique brand of simple yet catchy guitar riffs, and features some mind blowing solo’s proving once again that he is a God of metal amongst mere mortals in rock/metal music. The accompanying arrangement with piano and strings on the slower songs add a layer of intimacy and further show off his musical prowess. John DeServio(Bass) meshes the low groove of bass seamlessly giving the album that full deep sound that BLS fans are used to hearing. “Catacombs of the Black Vatican” is quite possibly the best sounding Black Label Society album they have ever put out.

My favorite song on the track was “Believe”. The riff has been stuck in my head for days upon end. The hook in that song is so memorable and I find myself singing the song everywhere I go. The riff is like a euphoric mix of “Suicide Messiah”, “Fire it Up” and “Concrete Jungle” all in one. This is sure to be a crowd pleaser for long time fans and new ones as well.

Combine the timelessness of “Stairway to Heaven” and add some signature Black Label society flavor a la “In this River” and what do you have? “Angel of Mercy”, a ballad that that pays homage to the bands predecessors that laid the foundation for today’s rock/metal. And yes, I used a “Stairway to Heaven” reference. This song just screams out classic, the type of song that your great grandchildren will talk about. There isn’t one single word I can use to describe how amazing the song writing and composition of this song is.

“My Dying Time” is an upbeat beer drinking, ass kicking type of song. I get the same type of adrenaline rush with this song as I did listening to “Fire It up” and “Spread your wings”. If I was going to get in a bar brawl and wanted a theme song to boost my confidence I would put this in my top 3.

When asked about the album in an interview, Zakk Wylde said “When I heard this record, I looked at myself in the mirror and started making out with myself.” This is a must have for your music collection. Zakk Wylde will forever carry on the torch that was handed down when we lost dimebag Darrell. R.I.P Dimebag, you are gone, but never forgotten.