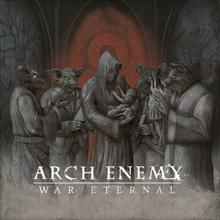 By DJ Insanity
“War Eternal” is the upcoming release from Swedish Death Metal band Arch Enemy. “War Eternal” is one of the most anticipated releases of the summer and is the premiere of Arch Enemy’s new line-up. The band embraced the transition from long time vocalist Angela Gossow to Alissa White-Gluz who is most known for her work with Canadian metal band The Agonist. Listeners don’t have to wait long before they realize what a great addition Gluz is at the forefront of the band.

Vocally, this album brought a lot more intensity and emotion through the songs as Gluz melts the face of everything around her. The intro track leads the listener head first into an eerie, intensely beautiful story. The combination of technical heavy riffs, intense screams and percussion that holds it all together drew me into the story that Arch Enemy told in “War Eternal”. The addition of Nick Cordle(Arsis) added a new element to an already perfect formula. At times in this album, the technicality of the guitars gave me a John Petrucci vibe. The cohesion between Amott and Cordle(guitars) should have listeners applauding the instant bond between the two. The new line-up seems ready to decimate audiences worldwide and will catapult an epic name in metal to new heights.

“War Eternal” the title track and first single off the album is a great choice to introduce the fans to the new line-up. Many elements are featured on this track and it is my hands down favorite on the album. It keeps the intensity, but also adds a melodic layer that got stuck in my head and was hard to forget.
“Never Forgive, Never Forget” Is the second track on the album and follows the prelude opening track. I was reminded of the older, heavier work from All that Remains. The core element of this song stays true to the foundation that made Arch Enemy the powerhouse in metal that they are today.

“No More Regrets” is an incredible song that got my heart racing. If there was ever a song that was Arch Enemy meets Dream Theatre then this is it. The middle of the song satisfied my appetite for full out metal assault. Simply put, Arch Enemy puts on a guitar clinic in this song. Guitar players everyone unite and rejoice this one!

“War Eternal” was a masterpiece that I never saw coming. Never before have I seen a band flourish so seamlessly with a new line-up. This is a new beginning for Arch Enemy and they have many more years left pleasing metal audiences. I believe with this album they will reach their greatest heights yet. Brace yourselves, this is going to be an incredible ride and I can’t wait to see what’s next.