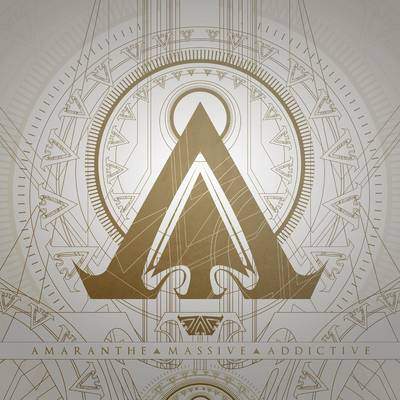 By Michael
A year after the release of Amaranthe‘s second album, The Nexus, the follow up album hits the shelves. In the last year, a lot of happened in the band and I wondered how this would affect the new album, Massive Addictive.

Well, lets start by saying that some things have improved, yet also some things can use a lot of improvement still. The addition of new grunter Henrik Englund is a great one. His harsh vocals sound great in mix with the clean vocals of Elize and Jake. Apart from that, the album seems to be over the top sometimes and not in a positive way.

Immediately at the first song, Dynamite, the album opens up very loud and screamy. Loud and screamy isn’t that bad, but as a first song, this was a bit too much. The first single of the album, Drop Dead Cynical reminds me a bit of a Marilyn Manson song, but I just can’t put my finger on it. One of the better songs of the album is Trinity. In this song the three types of vocals mix well and this is something Amaranthe should focus on more. The same goes for title track Massive Addictive.

The downside of the whole album is that it seems as if Amaranthe puts more and more forus on the trance/dance/pop aspects of the songs. In nearly every song there is a small techno style mid section, which acts like a sort of break in the song. Even in the ballad True, you can hear some unneccessary “digital” sounds in the background.

Also, during the song Unreal, it feels as if the band tries to reach higer vocals than they could normally reach. During the parts where Elize and Jake sing together, I mainly hear Elize, while in other songs this is mixed much better. Jake’s voice sounds great in the next track, Over and Done, and it seems as if he has improved a lot over the years.

Danger Zone and Skyline are to me the best songs of the album. Elize’s singing is nice and even on the backing harmonies, she adds another layer to the songs. Maybe it would have been better to end the album here, since I don’t feel as if the last two songs bring something new to the table.

All in all, even thoug Amaranthe has improved in some areas, the album feels like a step backwards for the band. Maybe it would have been better if they would not rely on the electric/computer sounds as much, since the songs in which those are less, sound much better and it feels as if those are better mixed. So for me, more metal, less techno/pop, and the album would have been much better!