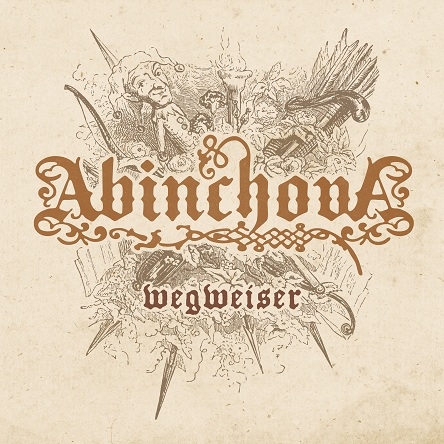 By: Omer
Switzerland! The land of quality chocolates, overpriced cheese, pretty ladies and more than a few extreme metal bands.

Abinchova is one of them, but they’re a tidy bit different. When I was told about a “Folk Death Metal” band from Switzerland, the first band that came to my mind was obviously Eluveitie, which bear similar characteristics (Swiss, Death/Folk, a-lot-of-band-members, etc’) but at the moment Wegweiser, the band’s new release, started to spin – every similarity went to the bin, which is quite good since I feared I might find a clone.

A talkative intro leads us to “Handgeschrieben” that opens with a light Melodic Death Metal tune that would remain pretty much the same for the whole album, nothing you never heard before, probably, but soon enough the fast paced structure is joined by several more elements, such as a violin and a female voice, sung by Nora. Her vocals are tender yet prominent.

These two combined, turns a somewhat predictable song, to an interesting one and adds a formidable layer of expectations from the material ahead. “Wandlung” and “Vom Gruenen Grund” after it, answers those expectations entirely, with heavier guitar work, a pissed off atmosphere (in the former one) that would inevitably make your neck start moving back and forth and folk instruments that are given a wider job here, where the violin for example takes up a leading role. Usually, this is a bad idea in the genre, but Abinchova manages to mix it properly with the rest of the instruments. Arnaud’s vocals don’t vary too much but his angry rasps suffices to the music (and again, the contrast to Nora’s feminine voice is magnificently crafted), and one can simply love the more traditional Heavy metal influences the band incorporates in their music from time to time.

I’ve been in the Viking/Folk metal world before it hit the big waves of recent years, and I’ve seen quite a lot of bands fall to different clichés in the genre, such as an over-powered folk instrument on top of the others, or repeating the same element over and over again. Abinchova seem to dodge most of those obstacles, and quite successfully. Enough to listen to the 5th track, “Flaschegeist”, to realize the band sounds like a tight, melodic mix between Crimfall, Varg and a some average modern-sound melodic Death Metal band.

Another flaw one can often pick up with bands such as Abinchova is the dominant keyboards, but here it’s not the case and I’m happy to hear the Swiss group wasn’t tempted to fall for that. The keyboards here are merely a nice addition in the background, adding a nice, thin layer of atmosphere.

If I can try and describe the majority of the material, as we progress on to “Unter Der Erde” and “Felsenfrass” I would say that I cannot really find any critical faults in Wegweiser. Each song is pretty catchy for itself, and even though the riff work doesn’t vary much and remains pretty much at the same tone, it leads the music and while being very melodic at times, it still holds quite a level or interest, even to the veteran Folk Metal listener.

Abinchova’s Wegweiser is not an entirely original album and it isn’t something we never heard before, yet it stands proudly as one that succeeds where many other albums have failed over and over again. It satisfies the ear, and it will surely satisfy the cheering crowd. Wegweiser is a milestone for Abinchova, as it is only their second full length, yet it’s a strong release that would surely get these guys some of the desired attention they deserve.
The Swiss band are now in my crosshairs, as I’m sure the future holds some nice achievements for them.