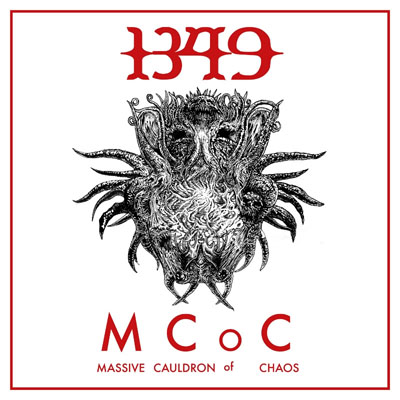 By Rob
With Massive Cauldron of Chaos, the Norwegian black metallers of 1349 arrive at their sixth studioalbum since the bands debut Liberation in 2003. During that time the band only had one misfire that carries the name Revelations of the Black Flame. One year later they took revenge with the great Demonoir. Now, more than four years later there is Massive Cauldron of Chaos and I’m pretty curious what we got.

The first noticeable thing is that the recording sound is a bit different. During the first two listening sessions, it quite bothered me. Later on, the sound grew on me. Song wise the albums starts great. Cauldron is aggressive and pumping and instantly sets the tone for the rest of the album. The song Mengele’s has that same feeling. These tracks consist of good, aggressive guitarwork that makes these songs powerful. Right after Mengele’s comes Golem. A short, but very effective song and a good intermission before Chained starts. This track that starts great, but halfway it continues in the same pace. Some songs have that on this album unfortunately. But the overall feeling is good.

Massive Cauldron of Chaos does not give me not the same feeling as listening to their older stuff, but the album has something different and it is nice. The voice of vocalist Ravn contributes to that. Ravn screeches and screams his way through the songs. Sometimes you might think that it sounds a bit less than on a old song as I Am Abomination, but it fits the slightly changed music. It still sound pretty sick to me. 1349 has always been one of the black metal bands I prefer to listen to, partially due to their sick sound. Massive Cauldron of Chaos is not necessarily 1349´s best album, but it is not their worst either. It is a good record that that gets better during every time you listen to it.