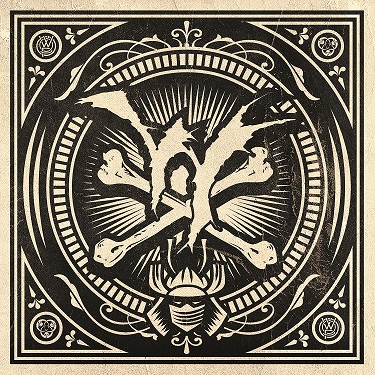 The haunting melodies of Open The Gates, makes a promising start of this album: Resistance, the fourth full length effort of USA-based band Winds of Plague. Being only slightly familiar with this group, reviewing an album of a band that mixes metalcore/deathcore with symphonic elements should be interesting at least.

Say Hello To The Undertaker, combines eery piano pieces with decent metalcore. The mid-tempo parts of the track give it a dull character, but the faster pieces and breakdowns bring some spice back into the song.

Generally, the music is quite standard. It is not bad, but most metalcore bands build their songs on the same kind of riffs, death growls and anthem vocals. Employing symphonic elements is the only thing distuingishes Winds of Plague from those other bands. But this element is not strong and unique enough to raise the music on Resistance from okayness.
Because of this most of the tracks just aren’t exciting, Left For Dead is a perfect example. Some of the other tunes are better, mainly because they are faster and thus awaken some excitement. One Foot In The Grave, for example is a good mix of brutal vocals, catchy riffs and symphonics that make you shiver.

All in all, fans of Winds of Plague may be happy with this effort, because it delivers exactly what you can expect from this band. But this is also the problem, the songs are decent, but very safe and sometimes not more than mediocre.