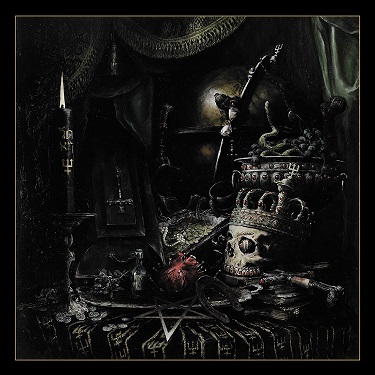 By Laetitia
In the last years, Watain has earned a spot amongst the more well known black metal bands. The response to their records differs from contempt from the purists, to appreciation from others. With The Wild Hunt, the Swedes set out from where they left off with Lawless Darkness (2010). The album features some experimenting, which makes it more accessible sometimes, but the classic Watain sound is still dominant. Altogether, this highly anticipated record does not dissapoint!

Opener ‘Night Vision,’ starts as a captivating and tranquil instrumental piece. When the riffs pouding drums join in, it becomes bombastic. The seconds between the intro and the first song, ‘De Profundis,’ are ominous, after which it is like the sky bursts and the chaos of this song takes over. Together with ‘Black Flames March,’ these are good, mid-tempo tracks and trademark Watain.

On ‘The Child Must Die’, you can hear that the band has been experimenting a bit. The song is more melodic and groovy, more accessible than others. ‘They Rode On,’ will probably surprise you. Hey, is this Watain? Some might say it doesn’t fit the album, because it takes you in a completely different direction. That’s true, but yours truly likes the variety that the track brings to the record. This melancholic, folk song like ballad, almost alike some Nick Cave songs, features vocalist Eric Danielsson who sings clean for the first time. His clean voice sounds pretty good: edgy and deep, which fits very well with the atmosphere of the song. You’ll also hear some nice solo’s that could fit into an epic rock anthem as well. You’ll either love it and think it’s one of the best tracks on the album or hate it.

‘Sleepless Evil’, is again a typical Watain track, a bit influenced by thrash metal. The title track is also an interesting piece. The calm, mid-tempo piece is complemented with choirs, spanish guitars in the end and you can here the clean vocals of Danielsson once more. The chants on ‘Outlaw,’ remind a bit of Melechesh, but then the song continues as you can expect from Watain. The album closes with two nice tracks (one instrumental). On ‘Holocaust Dawn, ’ the group experiments with rhymths mixed with their own traditional sound.

All in all, The Wild Hunt contains songs that are trademark Watain and others are unexpectedly different. Still, it’s not such a grand departure from their traditional sound that would put off many fans. Altogether, this has become a good and dynamic record. If Watain will continue to experiment is something we’ll have to wait and see.