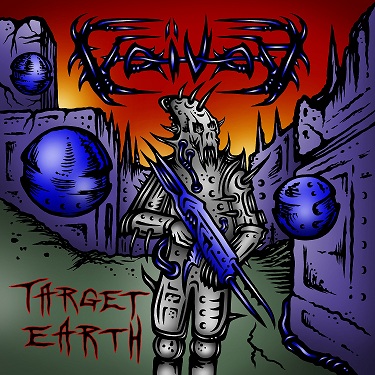 By Laetitia
Voivod’s previous studio album Infini was likely to be their last. Since the passing away of guitarist and main songwriter Denis D’Amour aka ‘Piggy’, both the records Katorz (2006) and Infini (2009) were based on material written by D’Amour. Yet when the remaining band members decided to keep Voivod’s legacy alive and played some shows with guitarist Daniel ‘Chewy’ Mongrain (Martyr). The lust to create new songs resurfaced, eventually resulting in the bands 13th record Target Earth.

Even though this is the Canadians first effort without material from D’Amour, Target Earth is trademark Voivod work. Mongrain clearly tried to live up to his predecessor when it comes to the (sometimes unusual) riffs and techniques and he succeeded. The first song ‘Target Earth’ is filled with dynamic guitar work and is has that ‘sci-fi’ feeling (mainly due to the lyrics). Of course Snakes vocals mark this album just as much. This is also the reason why I wouldn’t listen to Target Earth, his voice sounds dull and like a drag to me. Leaving that aside, the record takes you through odd dimensions, like the vocals on ‘Kluskap O’Kom’ or ‘Kaleidos’, a more accessible yet also incoherent track. Also some songs hint at songs from the bands peak years, reminding of Angel Rat. All in all, I’m sure that Voivod fans will be joyous about Target Earth. I also think they will not gain many new fans with it, as the music is distinctive, which you’ll either like or not.