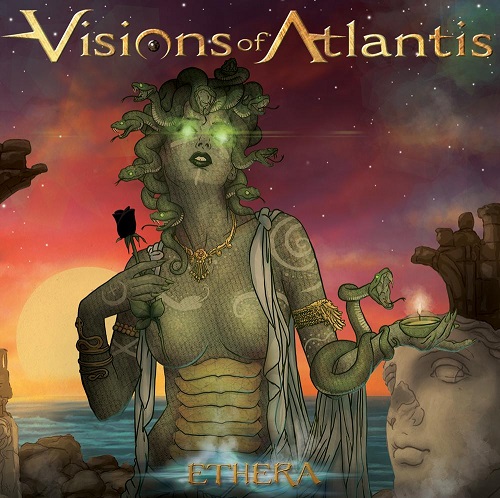 By Rob
Visions Of Atlantis, formed back in 2000, is releasing their fifth album called Ethera this month. I own their first two albums and that’s it for me. Since the release of Cast Away the band has disappeared from my radar. And when I look up some info about the band I see that I have missed quite a lot in the last couple of years. In the meantime Nicole Bogner, the first singer, has left and they’ve had another one for a couple of years. Since 2009 Maxi Nil is the new singer and this is the second album she is appearing on. Also I see that last year Nicole Bogner has passed away on the age of 27. Besides that, the lineup has been pretty steady.

When I start to listen to the new album for the first time, and opening song The Ark hits the sound system, it started really good, with those spacey sounds. But when Mario Plank starts to sing I remember something from the early days. I really didn’t like his voice on the Cast Away album. Now nine years later I must come to the conclusion that I still don’t like his voice. It just sounds so dull and unimaginative. But fortunately there is also a female singer. And she can sing pretty good. A nice voice I can easily listen to, nothing annoying or such.

About the music. What I said before, the first half minute of The Ark is really good. Unfortunately that kind of sounds does not appear further more on the album. And I really hate to write something bad about this band because I wish them so much more. But the only conclusion I have when I have listened the album several times is that the album is kind of dull. There is no song that presents how good they actually can be. Nothing of their greatness of the first two albums is there. Even the ballad sounds like a quickly written song with no feeling in it. Of course not everything is that bad. Several songs have some good parts, nice riffs, cool guitar solos or some cool drum parts. But unfortunately that’s it. I hope for the future a better album with more imagination will come out. I will check out later the two albums I have missed. I’m really curious now how those albums are.