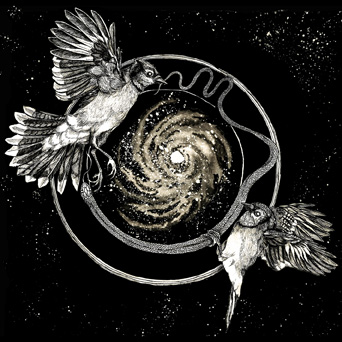 As the days grow darker and the air becomes bleak, there is no better moment to discover a band whose music seamlessly fits the state of mind of the autumn season. Observant fans already know Vattnet Viskar (‘the water whispers’) from their impressive EP (or demo). Now, the stars have aligned for the first full length offering, Sky Swallower, to be appraised by a broader audience.

Contrary to what the name implies, Vattnet Viskar is not Swedish. They hail from the nation of McDonalds, which also seems to be fertile soil for ambient/post/-black metal. Bands as Agalloch, WITTR and many more have opened the path before them, and fortunately these musicians are on the right track of living up to the standards that were forged by the pioneers.

During the first notes you hear that the production is clear, but with a raw edge. New Alchemy does not start out as inventive. The sharp riffs and the deep, death metal-ish grunts, remind a lot of a neater version of Blut aus Nord. The recognition of music will remain throughout the album, but that feeling is not dominant and it is worth the while to continue to listen.
After the hopeful, ‘dawn-is-coming’, interlude Monarch, the enthralling The Breath of The Almighty sweeps in. Resonating riffs and luring bass and drums get you into the song, after which chaos is unleashed and the track takes you from one extreme to the next.

Mythos is a dense song, starting out as fast, typical riffs and blasts. This song points out the strong point of Vattnet Viskar: their dynamic songwriting. No tracks stays the same throughout it’s running time, but the transitions are fluid. The same counts for the final song, Apex. Its last minutes are so tranquil, that almost makes you uneasy.

All in all, Sky Swallower is a good full length effort. The band has not (yet?) parted from the prevailing influence of the gods of this genre, but the music is still dynamic and a pleasure to hear. Hopefully, these Americans will insert a bit more of their own style in the future, otherwise their potential might fade away amongst the already established groups.